The showdown between super-middleweight rivals George Groves and Kenny Anderson is rapidly approaching, with less than three weeks to go until the pair clash for supremacy at London’s Wembley Arena. Both boxers are keen to better their earlier performances; the stakes are high, in terms of pride and proving their advancement as professionals.

Dedicated boxing channel BoxNation will air the thrilling contest live on March 16th. 23-year-old Groves is fresh from a second round stoppage over Paul Smith last November, whereas strong-willed Scot Anderson has won his last three outings since meeting Groves in 2010. The two men have worked tirelessly for the event, with both having underlined their growth as pugilists in the months since their original battle.

Groves is out to repeat the success he has found against top British rivals James DeGale and Paul Smith, displaying both power and increasing skill. Anderson – who at one point floored the Londoner in their previous dust-up – intends to expose Groves’ weaknesses again, this time leaving with his opponent’s titles. 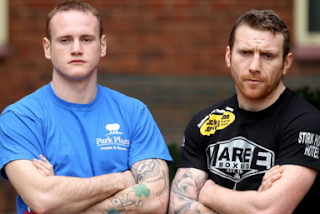 This fight has all the potential to become one of the most sensational contests on BoxNation thus far. With Groves’ confidence and ability on the rise, he must not give the tough Scot an opportunity to steal his glory. Anderson is hungry, courageous and set on having his day at last. ‘The Saint’ will certainly not underestimate such a dangerous contender.

Groves, who is still growing as a professional, needs to prove his class by tackling his old foe with the style, knowledge and belief he has visibly gained. Anderson, who appears renewed in his focus to become a British title-holder, needs to pressure and overwhelm the Londoner. A second time around, how differently ‘The Saint’ deals with the aggressive orthodox should unearth his level of progress as a boxer. One expects no repeat of the heated emotion he displayed when slugging it out on the last occasion, but a sharp and diligent approach. Anderson too will have worked on adding more to his arsenal for their rematch, coming in with the full fitness and preparation he did not possess in November 2010.

Yet most observers expect young Groves to outclass the Edinburgh man with his technical prowess. He has shown rapidly advancing ability with every performance, and is quickly earning a place in the hearts of many fans with a calm, composed and professional approach to the noble art. The task of derailing ‘The Saint’ is a far bigger challenge now, and the rewards too for such an achievement are greater.

The burgeoning star of British boxing and the hard-hitting underdog make this fight an exciting and not-to-be-missed event for fans. Groves has overcome the Scottish prizefighter before, but this time he takes centre stage as he vows to leave no questions unanswered regarding who is the superior fighter.

George Groves vs. Kenny Anderson will be live on BoxNation, Sky channel 456 and Virgin channel 546 on March 16th.