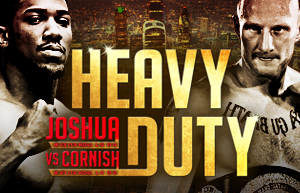 Cornish confident he can stop Joshua on Saturday

Shy Scotsman ready to make a big noise in London

Gary Cornish says he’ll do his talking in the ring and end Anthony Joshua’s rise in the Heavyweight division when they clash for the vacant Commonwealth title at The O2 in London on Saturday (September 12), live on Sky Sports.

Cornish has kept a close counsel in the build-up to the huge showdown in Greenwich, but the unbeaten Inverness man says he is confident that he will make his doubters eat their words by stopping the Olympic gold medal hero.

“Too many people in the media have talked about this fight,” said Cornish. “I know that many people are underestimating me and I’m not bothered about that. I’m a quiet guy who just goes about my own business. I don’t listen or pay any attention to what they say. I’m not going to give anything away on what we are going to do – but I will surprise people on the night.

“I’m going to turn up to fight and win as I always do. I’m there to have a fight with Joshua and I’m confident I can outbox him and I can stop him.

“We are two undefeated fighters who are willing to put their 0’s on the line – both big punchers and it definitely won’t see the final bell, someone is getting knocked out. I’m relaxed and quietly confident in myself, I respect him but we will be victorious.”

Cornish’s clash with Joshua is part of a huge night of action at The O2 – with Brixton Heavyweight Dillian Whyte gunning for a showdown with Joshua at the same venue on December 12 and taking on Brian Minto.

Dave Ryan and John Wayne Hibbert clash in a rematch of their fantastic battle at The O2 in May with Ryan defending his Commonwealth and WBC International Light Welterweight titles – that clash will be of great interest two four other Light Welterweights who face-off in Greenwich, with Ricky Boylan meeting Danny Connor in a Carshalton derby and unbeaten 21 year old Tommy Martin facing Luton’s Michael Devine.