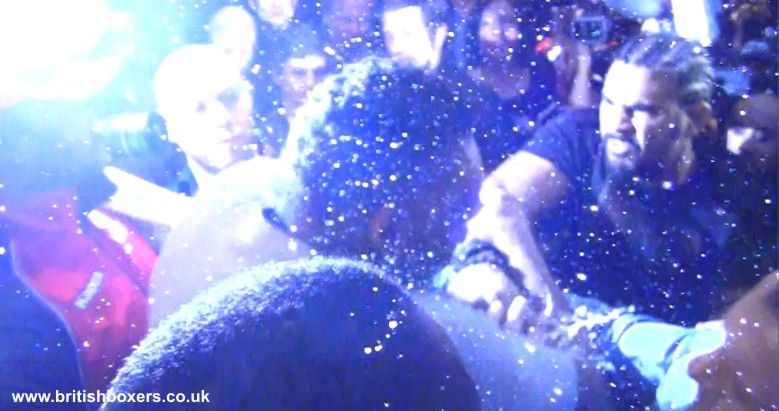 Twelve rounds against Vitali Klitschko were not enough for Dereck Chisora, when he decided to confront fellow British boxer in attendance David Haye at the post fight press conference.

Watch the Press Conference brawl video above
At an heated press conference in Munich, things turned nasty when Chisora left his seat to confront Haye, who had been goading him. The pair exchanged words and Chisora said. ‘Do you want to say it to my face, I’m coming over there.” After Haye mocked him about losing his last three fights.
Chisora walked over to Haye and pushed his fist into his face has he went face to face with him and you wasn’t sure if he was going to punch him or kiss him! Haye didn’t wait to find out and flipped to fight mode, throwing a landing a right hand left hook, right hand which dropped Chisora. The fighters were separated and Chisora got up but on unsteady legs and began to shout, ‘He glassed me, he glassed me, referring to the fact that Haye had been holding a bottle of fruit juice when he landed the right hand and the bottle had exploded.
Then Chisora’s coach Don Charles went to seek revenge on Haye and confronted the former heavyweight champion in fight stance throwing a a punch at Haye, Haye responded and they exchanged some very hefty digs on each other. Haye picked up a camera tripod and launched it at Charles. – There was no security to break this brawl up and things had well and truly got out of hand. Haye’s manager and trainer Adam Booth was caught by the tripod that Haye picked up and threw into the melly. Booth suffered a gashed forehead, and looked visibly dazed. Watch video click image above.