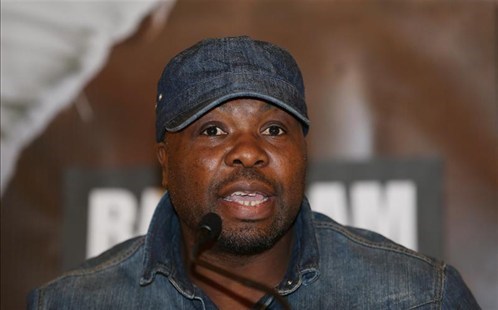 Life is what happens while you are making other plans and that is also true of boxing. Sometimes you have to throw the game plan out of the window and adapt to unforeseen circumstances in order to win. Unless Don Charles is in your corner, in which case the plan is going to work…

After an 18 months split, the Edgware based tactician lead heavyweight contender Derek Chisora (29-8, 21 KOs) to the best win of his career against Carlos Takam. The London based trainer, originally from Nigeria explains to us the careful preparation behind an apparent upset and predicts a bright future for his main charge and other members of his growing stable.

BB: What was the original game plan going into the fight with Takam?

DON CHARLES: The original game plan was to be prepared for every eventuality. Often you go into a fight expecting one thing but the opposition has something else in store. Through experience, we learned to have plan 1, 2 and 3. If 1 does not work, we switch to number 2 and so on.

This wasn’t a “Rumble in the jungle” type of scenario, where Ali had to adapt and improvise to win. After studying Takam, we isolated the styles he implements and prepared for every possibility. We spent many rounds in sparring fighting off the ropes as one of the options. We anticipated what actually happened.

BB: You explained after the fight that you had been working in training on the final right hand shot, which was actually the same punch Derek used to end his previous bout. The shot in itself is pretty straightforward, a textbook right hand. How do you get the opponent in a position where you can use it effectively?

DC: It’s the classic Rocky Marciano right hand. We haven’t done anything that hasn’t been seen before and the set up is also very basic: jab to the chest and right over the top. Again, it was one of many options. Derek always used that shot but his footing was wrong. Through practice, we perfect it and it’s no good news for future opponents.

BB: We saw Derek using it twice in a row already and you defined it as his signature shot. Don’t you think future opponents will be prepared for it?

DC: We count on that and we prepared other things based on that assumption. We had big losses in big fights and learned. We now have all the tools. From this point in his career onwards Derek will be a very hard man to beat.

BB: You called out Whyte and Miller as possible future opponents on the route to a title shot. Given the choice, who would you rather fight for it: Joshua or Wilder?

DC: In an ideal world, we would fight Wilder first and use that belt to get Joshua in a 100% UK unification super fight. But, realistically, I don’t see that happening in the near future. Those belts are tied up, but more because of Wilder.

No disrespect but he is not making money out of that title, he is just holding it hostage. The WBA belt of Manuel Charr could be an option to force our way through or else Whyte would be the logical choice. Actually, he is the one with nowhere to go. He is not going to get either Joshua or Wilder, we are the only meaningful fight for him.

BB: Fury is also in the mix. Would you consider facing him a third time?

DC: I am honest: he would be the last one in our list. The only way this happens is if Fury has something we want, meaning the world title. Every time we fought him, he had all to gain and nothing to lose, namely our British and Commonwealth belts in the first fight then the European in the second. Also, considering how those fights played out for us, if we take that risk there has to be something big in it for us.

BB: Did you have any influence in your son George Fox decision to become a professional boxer? Is it a choice you support?

DC: Like most fathers who know about boxing, I would have preferred my son did something else. I trained him only for self defence and he wanted be a footballer but he is too tall. He said when he joined the Amateurs that he just wanted to see what would happen and take it from there and that’s the same spirit with which he has turned pro.

BB: How do you assess his debut performance? How far do you think you can take him?

DC: He is better as a Pro than as an Amateur, I was happy with the way he picked his shots. Our goal is to win the British title in 12 fights, which I achieved with Derek. Joshua won it in 15, which is close by so I think it’s a realistic target.

BB: When can we expect to see him out next and against whom?

DC: September or October, we will probably find out the opponent within 3 or 4 weeks from the actual date.

BB: Who else you are training at the moment that we should be keeping an eye on?

DC: Frank Buglioni is definitely going to come back. He wasn’t beaten conclusively, he just suffered a very quick KO, very much like in Formula 1 when a car that has earned the no.1 spot in the qualification gets bumped out of the race. These things happen in sport, it’s no big deal. He is a stable person, mentally strong and with a tight team around. Also, Miles Shinkwin. Plus I have a few prospects coming through. Watch this space.

BB: Is there anything else you want to add or share?

DC: UK is at its strongest in pro boxing at the moment, we have a champion in almost every division and it’s not going to stop tomorrow. I am glad to be part of this and aim to leave my mark.