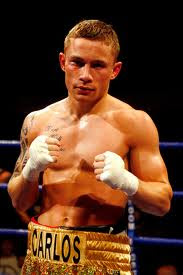 Although Matchroom built the show around the ‘War of the Roses’ meeting at the top of the bill, Frampton’s second defence of his Commonwealth title was given a big build up by Eddie Hearn, who believes that his lively super bantamweight is the future of the domestic division.

Frampton, however, did not prosper from the meeting with Ankrah; the visitor was far from the ‘teak tough’ cliché of an African warrior – he was tamely torpedoed by a left hook that appeared to only graze his chest.  Still, Frampton was sharpness personified during the brief bout, he now has his gaze firmly set on British 122lb boss Scott Quigg, who was at the venue, and European titlist Kiko Martinez, the Spaniard was due to defend against Frampton in September only to withdraw when his father fell seriously ill a month before the contest.

Barry McGuigan manages the 25-year-old Commonwealth titlist.  McGuigan won British and European featherweight titles en route to a WBA world title win over Eusebio Pedroza.  “The Clones Cyclone” hopes that Frampton can follow in his footsteps; he has repeatedly called for a showdown with Quigg and has exchanged bullish Tweets with Joe Gallagher, Quigg’s trainer, and Hatton Promotions Director of Boxing Richard Poxon since Saturday night’s victory.

Quigg has indicated that he has already signed on for a showdown with Hatton Promotions stablemate Rendall Munroe, a former European title holder and world title challenger.  Quigg vs. Munroe is set for the summer, no date confirmed yet and with both under the Hatton promotion banner, looks a foregone conclusion.

McGuigan wants to secure his charge the opportunity to prove that he has the potential to move beyond domestic level and contest for the top titles, one or two people have accused the former fighter of hyping his man up in order to secure a big fight.  The former world champion insists that they are going about their business the right way and showing ambition by calling for the top domestic and European names, he believes that Frampton, 13-0 (9), will reproduce the skill and élan he has shown in recent contests when he moves through the levels.

“I think there’s those out there who may say I’ve already hyped him [Frampton] too much,” McGuigan told Boxingscene.com about his calls for a big domestic or European showdown.

“We’re not doing it in a bad way, I just think Carl’s a great talent and the things he does in the gym are exceptional.  I hope he gets the fights this year to prove that he is an exceptional fighter.

“We would love to have Scott Quigg next, and [Rendall] Munroe, and [Kiko] Martinez [in coming fights].  We watched Martinez [when he defended his EBU super bantamweight title with a 12th-round TKO against Arsen Martirosyan on March 9], Quigg and Munroe are also powerful guys – I don’t think Munroe is as good as he used to be, but he’s very talented and the number one in the country.  Carl would like to fight him to prove he’s the number one.”

Martinez has been knocking around European level since demolishing Ireland’s then-EBU title-holder Bernard Dunne in a single round back in August 2007.  Decision defeats to Munroe, in 2008 and 2009, and Takalani Ndlovu, also in 2009, seemed to spell the end for Kiko as a contender.  “La Sensación”, though, got himself back amongst the KOs and stopped Britain’s Jason Booth for the vacant EBU belt in April of last year.  Kiko can be out-boxed, he can be discouraged, but he can also crack.  Frampton’s handlers showed a lot of faith in his ability by agreeing to the ill-fated Martinez fight.

“Martinez is also someone we’ve been talking to,” revealed McGuigan.  “We had the fight last September; it fell through because his dad was ill in hospital.  We hope that one will happen this year as well.  We’re hopeful that our promoter, Eddie Hearn, is going to make these guys substantial offers so they’ll come and fight us.”