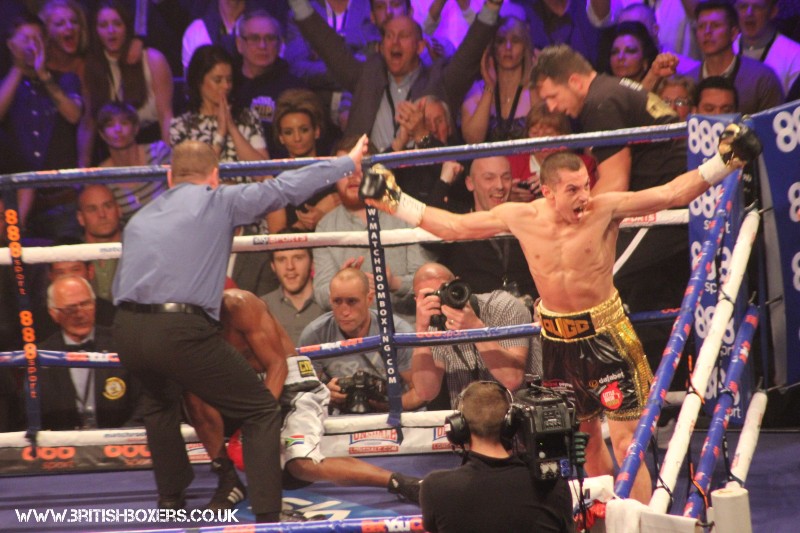 Scott Quigg beat Tshifhiwa Munyai at the MEN arena last night in defence of the WBA Super Batamweight title he pounded from the body of Rendall Munroe in the same arena nearly 18 months ago. Munyai was a late stand in for Nehomar Cermeno, who couldn’t get a visa. In this case the stand in guy was arguably a tougher prospect than the original opponent, despite Munyai not having had much time to train for the fight and Cermeno being ranked as the Number one challenger. Munyai is a rangy fighter and he was vaunted by Eddie Hearn to be a “proper test” for Quigg. I thought the same as the first round got underway; that was until a lovely left hook landed flush on Munyai’s chin like a Manchester bouncer on a ten pint Rocky at closing time. Munyai landed straight on his back and it seemed to many he was finished, but he climbed back up onto wobbly legs and saw out the remaining 13 seconds of Quigg’s assault before the bell sounded. Munyai clearly hadn’t recovered properly at the start of round two, but settled into things again until a wonderful one-two, left right combination sent him to the floor. Ref Howard Foster (for it is he..) gave Munyai a solid and serious look in the eyes before allowing him to continue but even Howard’s attempt at regaining some Karmic value did nothing and Quigg merely battered him onto the ropes at the other side of the ring. Foster leapt in, and this time nobody disagreed. Another defence for Scott Quigg and more kudos for this tight, solid, focussed fighter from Bury. Munyai hadn’t been whipped as easily as that before and perhaps, just perhaps, Quigg is rolling onto a big domestic fight – after all, we know his promoter is fond of them…. Carl Frampton anyone?