It had been billed as the biggest night of championship
boxing in the history of the Queensbury Boxing League, and the aptly named
Night Of Champions event delivered another highly entertaining and
competitively matched card of boxing for the capacity crowd who had packed into
the Epsom Downs Racecourse in Surrey to enjoy the night of action.
Established just over two year ago by former English
Welterweight champion Ross Minter and promotional partner Alan Foley, the
league was developed to offer boxers competing outside of the traditional
amateur and professional ranks an exciting and credible platform to compete on,
and its seems that the promotional duo’s formulae of close competitive fights
fought over the shorter round distances has really started to gain momentum
attracting more and more good level ex amateurs and a handful of former
professionals keen to get exposure on the televised events going out on Eurosport.
Headlining the twelve-bout card Croydon’s Gareth Gardner was
in Middleweight title action as the former England amateur international took
on Streatham’s Michael McPherson for the leagues vacant British 160lbs bauble. Gardner was returning to action after claiming the leagues vacant British title
at the weight above, and once again he proved to be the superior operator
claiming his second league title via unanimous decision after five competitive
rounds of action.
From the opener it was clear McPherson had elected to try and
operate from range as he tried to pick off the advancing Gardner with fast
counters, but Gardner looked the stronger of the pair as he bullied his way
forward forcing McPherson to give ground as he unleashed numerous barrages of shots.
Gardner’s best work came mid way through the contest as he unloaded some of his
trademark body punches that looked to be his most potent weapons, and try as he
might McPherson was forced to play second fiddle during the majority of the
exchanges. It was another solid performance from the now two-weight champion
and could pave the way to some exciting showdowns later on in the year. 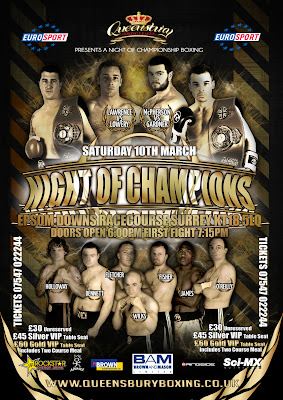 Returning after a six-month layoff to appear on the bill,
reigning Queensbury British Light Middleweight champion Dan Lawrence who is
trained by former professional champion Matt Marsh was in action making the
first defence of the crown. Lawrence had won the title back in September on
another of the league’s events at the Epsom Downs Racecourse, and was returning
to the scene of his greatest triumph to try and repel the challenge of the
experienced Aaron Lowery from Margate.
In the build up to the contest both champion and challenger
had promised that they would have no trouble in finding each other when the
first bell sounded due to their similar pressure style of fighting, and the duo
made good on their pre fight predictions from the opening seconds of the fight
as the pair met in the centre of the ring and started to acquaint each other
with the taste of leather.
As the round progressed it was clear the challenger Lowery
was getting the better of the argument by landing the more meaningful shots,
and as the round ended it was clear that Lawrence would need to improve his
defence if he was going to remain the champion. The second stanza of the
contest was a far more positive one for the champion as he seemed to find his
rhythm and started to land some good shots of his own which got the challenger
attention, but although in control of the action during the round the champion
looked visibly tired as the round finished.
Over the course of the final three rounds it was the
challenger Lowery who took control of proceedings landing the quality shots
that just seemed to have the edge during the majority of the exchanges, and
with both champion and challenger clearly showing the effects of the relentless
pace when the final bell came, the opinion at ringside was that the title would
be changing hands. As referee Seamus Dunne called both boxers to the centre of
the ring it was Lowery that was left to celebrate after claiming the title with
a unanimous points verdict.
Topping the evening off in thrilling style was the clash for
the vacant Queensbury English Super Middleweight title between Margate’s
explosive Sam Holloway and Lewisham’s experienced amateur Police champion
Rossco Parker. Holloway had burst onto the league last time out with a
devastating first round knockout of the previously unbeaten James Garton and
was looking to build his reputation as one of the league’s most devastating
punchers, whilst Parker a self confessed underdog in the contest was looking to
make an instant impression in one of the league’s busiest divisions.
The highly anticipated clash exceeded all expectations
throughout five relentless rounds of adrenaline-fuelled action that had the
entire arena on its feet from start to finish.
From the beginning of the fight Holloway looked purposeful as
he relaxed into the contest looking to land his power shots on the advancing
Parker, but during the first few rounds it was the Lewisham man who was landing
the greater volume of shots and looked to have built up an early lead in the
bout.
Midway through the third Holloway turned proceedings on their
head after landing a crunching left hook moments after absorbing a hurtful
looking body shot that sent Parker crashing to the canvas, but to Parkers
credit he found his feet quickly after the heavy looking shot and surprisingly
did not look too shaken given the manor in which he feel to the floor.
As the absorbing contest played out over the final two
stanzas it looked just to close to call as the pair continued the breathtaking
pace, and with opinion divided as to who would emerge victorious it left down
to the judges to try and split the courageous pair.
As the both boxers waited anxiously in the centre of the ring
to hear their fate, it was Holloway who got the nod by a razor thing majority
point’s decision much to the delight of his army of supporters.
Also appearing on the undercard Hastings Ian Fletcher
successfully defended his Queensbury Southern Area Super Middleweight title
with another highlight reel knockout victory over Croydon’s highly fancied
Nigel James, Morden’s former kickboxing star Dean Hanley secured his first
boxing title defeating Brighton’s Mark “The Hammer” Smith via a unanimous
points decision to lift the league’s novice Cruiserweight belt and Ramsgate’s
rising Light Middleweight prospect Stevie Little stopped Norfolk’s Haydon Ali
to further his ambitions of contesting the league’s vacant novice 11 stone belt
sometime this year.

The show will be going out on Friday March 30th at
9pm exclusively on British Eurosport 2 channel 411 and is also available to
Virgin media customers on channel 525. With the league already working towards
their night event scheduled to take place on April 28th it will be
interesting to watch the event develop and see just how far it can go.