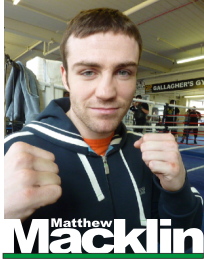 Brave to the end but out-gunned, Matthew Macklin failed in his bid to defeat the globally recognised middleweight champion of the world, when he was retired by his corner at the end of the 11th round, after an action-packed fight in Madison Square Garden on Saturday.

Although no major belts were at stake because of sanctioning issues, Martinez kept his reputation as the top fighter in the division and proved his credentials once again as one of the most accomplished fighters in the world. The Argentinian is now 48-2-2 with 28 knockouts.


Macklin was deemed to have knocked Martinez over in the seventh, when the champions glove touched the canvas, Macklin had connected with an overhand right. But on reflection it looked like Martinez had half stumbled over Macklin’s trailing leg, but the referee picked up a count.

The knockdown only spurred Martinez on and he dominated the rest of the fight, taking away the mid fight influence Macklin had had, after a tricky start. Martinez’s counter punching was catching Macklin out with frequent regularity now, and the 9th and 10th, were hard rounds for him. Macklin was always there and never gave up!

But after the beating he took in round 11, Buddy McGirt his trainer, took the decision away from his fighter and compassionately signalled to the referee that he was pulling his warrior out.


Macklin, 29, put in another gallant shift, as he always does, but came up short again in his second fight in succession for the top honours in the middleweight division, after losing out to Felix Sturm last year in Germany.

Martinez, 37, despite his increasing years, was just too sharp, too fast and too experience for ‘Mack the Knife’ But the Birmingham man did himself and British boxing proud with his spirited effort, and be sure it isn’t the last we have seen of Matthew Macklin.
Macklin, who’s professional record now stands at 28-4 with 19 knockouts. in typical fashion said he did not want the
fight stopped. “I never ever quit. I wanted to continue,” he said. “But
I’m never going to quit.
“I started reaching a bit and forcing
things a little bit too much, and maybe played into Sergio’s hands a
bit.
“He’s a much better fighter than Felix
Sturm. (Macklin’s last world title fight opponent)
“The
better man won tonight, I thought it was a close fight but the last few
rounds he pulled ahead, and he had to be sharper. I fell asleep a
little bit, stopped moving my head and came a bit heavy on my feet and
walked into a few shots.” Macklin added.