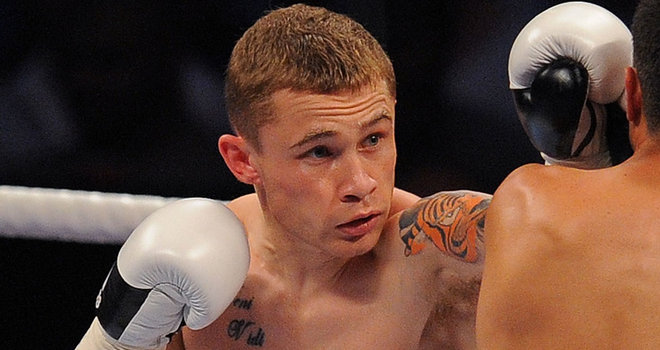 Titanic Frampton brings the boxing glory days back to Belfast

Carl Frampton has won the IBF Super Bantamweight title with a commanding unanimous decision performance over Kiko Mantinez, sending 16,000 jubilant fans home from the purpose-built arena in Belfast’s Titanic Quarter with a night that they won’t forget for a long time.

Frampton dictated the fight right from the opening bell, picking Martinez off with straight, spiteful shots as the Spaniard came forward, and the rest of the fight followed suit. Although Martinez did have some success in the later rounds, Frampton was simply too good for the champion, who once again showed how tough a man he is, rising from the canvas in the fifth round and making it to the final bell.

For a long time, Frampton’s mentor Barry McGuigan has told anyone who would listen how Frampton was a champion in the making, almost struggling to control himself when describing the amount of talent that his man possesses. Major credit must go to McGuigan as well as son Shane for the way they have backed Frampton from the start of his career, guiding him all the way to a world title.

Last nights World Title win has now set up some potential super fights for Frampton. “There’s so many options and the only one I want to fight is Scott Quigg. Eddie Hearn needs to remember that I’m the one with a legitimate belt. I’ll fight him in Manchester, I’ll fight him anywhere”, announced Frampton in his post-fight interview. This would be the fight that most British fans would most like to see. Personally, I think a fight with WBC Champion Leo Santa Cruz has the potential to be a fight of the year candidate, with the high pace and aggression in which both men go about their work. The IBF have however stated that Frampton must next face his mandatory challenger Chris Avalos, who has somewhat surprisingly joined forces with Matchroom to co- promote him alongside Top Rank.

There is also the small matter of Guillermo Rigondeaux campaigning at Super Bantamweight, who is one of the most avoided fighters in boxing today, should Frampton relish the opportunity to compete himself against  the very best. Jhonny Gonzalez, Abner Mares, Nonito Donaire, and Vasyl Lomachenko all campaign within one weight division of Frampton, so there is no shortage of big names out there for the Belfast man.

Wherever Frampton goes from here, one thing for certain is that the glory days are well and truly coming back to Belfast.