Matty Clarkson signs with Lonsdale ahead of April 14th fight 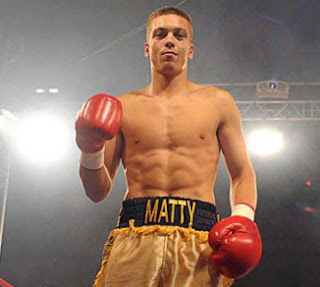 Undefeated light heavyweight boxer, Preston’s Matty Clarkson (24), has joined iconic British boxing brand Lonsdale’s stable of sponsored fighters.
Under the terms of the deal, Clarkson will wear both Lonsdale apparel and gloves for training and fighting.
Clarkson’s next fight, his Lonsdale debut, is against Jeff Evans at ‘The Big Bang’ event to be held on April 14th at the Echo Arena in Liverpool. It is on the undercard of the British light heavyweight title clash featuring Tony Bellew and challenger Danny McIntosh.
Clarkson continued his unbeaten record a week ago when he KO’d his opponent Sam Couzens in Round 5, taking his record to 6-0-1 (1). Of the occasion he comments, “I’m looking forward to my fight against Evans and representing the Lonsdale brand. Lonsdale is renowned in the boxing world and it’s great that the brand has chosen to support me.” Clarkson’s promoter, David Coldwell said, “Matty is an exciting young boxer and a great new signing for us.
He’s ready to show the boxing world that he can mix it with competitors like Evans and it’s great that this has been recognised by Lonsdale.”
“We’re very excited to welcome Matty Clarkson to the Lonsdale team,” said Lonsdale’s Head of Sports Marketing, Sunny Singh. “The beginning of his career has been exciting to watch and we look forward to working with him and Coldwell Boxing and seeing what he does next.”
In joining Lonsdale Clarkson is in very esteemed company, as boxing legends Muhammad Ali, “Marvellous” Marvin Hagler, Lennox Lewis, Mike Tyson, Joe Calzaghe and Ricky Hatton have all trained and fought in Lonsdale.