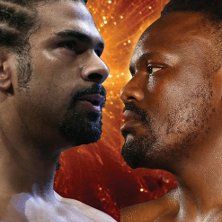 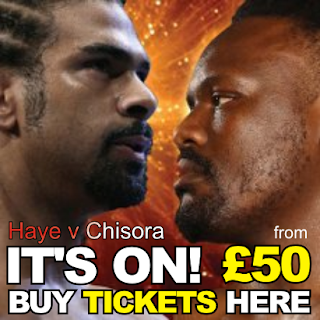 Tickets have gone on sale this afternoon, immediately after today’s press conference to promote the heavyweight clash being branded Licensed to Thrill’ – This is how they are billing the fight!
It’s on! The fight the whole world wants to see, David Haye will take on Dereck Chisora this summer in a heavyweight blockbuster.Haye and Chisora will face each other at West Ham Football Club’s Boleyn Ground at Upton Park on Saturday 14th July. The pair have already clashed outside the ring, but now they get it on in the proper place – the boxing ring – to settle their difference once and for all.
Dynamite punching Haye, the former WBA World Champion, has knocked out 23 of his 25 opponents early, while heavy-handed Chisora has stopped 9 out of his 14 wins.
It’s the BIGGEST fight of the year and the most explosive so make sure you’re there to see it!! Also on the card will be the WBA Heavyweight Champion of the World Alexander Povetkin defending his title against former world champion Hasim Rahman, plus a further fight to be added.