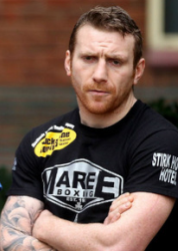 Edinburgh’s Kenny Anderson will appear on the VIP Boxing Promotions bill at Liverpool’s Olympia venue this Saturday night. Anderson, 16-1 (12), has taken the job in a bid to stay busy after hearing only recently that his on-off British title rematch with George Groves will be put back out to purse bids as Frank Warren Promotions failed to secure a venue in time for the contest’s July 30 deadline.

Kevin Maree, the trainer of Anderson, was disappointed when the news came in about the Groves fight. Indeed, the Lancashire-based coach recently told www.boxingscene.com that FWP did not keep them in the loop about the difficulties surrounding the staging of the mooted bout.

Maree, though, has temporarily put the Groves fight to one side in order to ensure that his 29-year-old charge keeps active while waiting on a new date for his meeting with the Londoner.

“[Anderson’s manager] Steve Wood and [promoter] Eddie Hearn have done well to get him out after the disappointment we had with the Groves fight, so it is great news and they’ve done great to get him fighting again,” said Maree when confirming the fight.

“We’ll be looking at keeping him around the super middleweight mark, but it probably won’t be on the championship limit and we should have an opponent by tomorrow. It would have been nice to have been kept in the loop that it [the Groves fight] wasn’t going to happen because we ran up costs for training and had a lot of messing around for the previous scheduled fight [a March bout that was pulled just ahead of the contest due to an injury suffered by Groves]. It is very unfortunate and annoying to be honest, but we’ve got to put it out off our heads.”

He added: “It is great that Steve and Eddie got Kenny this date because it keeps him on a roll, he has stopped his last four, keeps him out and means he won’t be on the shelf until September [the new deadline for Groves-Anderson II]. Obviously as an Irishman and a Scotsman we’ve made the decision to sacrifice the England-Italy game to train [on Sunday night].”

Tickets are available via www.vipboxing.com.

Please send news and views to neckodeemus@hotmail.co.uk or Twitter @Terryboxing. Courtesy of Rick Reeno and boxingscene.com