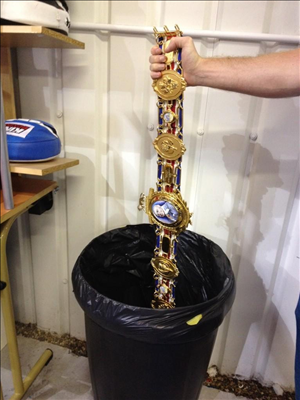 George Groves last night posted a picture on Twitter of himself putting the super-middleweight Lonsdale belt (British title) in the dustbin, after he was forced to give it back to the BBBofC after failing to defend it in time against Kenny Anderson.
Newly crowned British super-middleweight champion Kenny Anderson won the vacant title by stopping Robin Reid on Saturday night, but wasn’t presented with the actual belt. Instead on the night he adorned Jamie McDonnell’s bantamweight strap for photo and TV purposes, because Groves had not handed it in on time for the fight.
After posting the picture Groves wrote on his Twitter page, “If any of you understood what me and my family have had to endure this year from Anderson’s family and close friends you would understand.
“Disgusting abuse, racism, death threats to me and my wife, police showing up at 1am to my house but to name a few… #KeepTheBelt#YourLevel.”
So where as all this come from?
Groves defeated Anderson in defence of his Commonwealth title in November 2010 via a 6th round stoppage, but in what was possibly his toughest fight to date and the fact Anderson had comeback from that defeat to make himself mandatory challenger for Groves’ British title, a rematch was arranged for 16th March this year.
Groves pulled out of the Wembley Arena fight a week before, sighting a back injury whilst sparring. But it later came to light that Groves had been warned to keep his guard up by police after they received a tip-off that he would be gunned down as he fought.
The then British and Commonwealth champion withdrawal was said to be at the time by his management ‘unrelated to threats against his life.

But an unnamed source had reported to a tabloid newspaper that ‘George and Sophie [his fiancee] were told by CID officers a threat had been made on his life and they should consider their safety.

‘The intelligence said if he wasn’t shot before the fight, it would happen in the ring!

Anderson meanwhile who stopped Robin Reid at the weekend in a fight for the vacant crown, hit back at accusations that his friends and family were to blame for Groves death threats

“I have no idea what Groves problem is, I’ve not said a word about him since he was stripped of the British title which obviously put stop to any chance of us fighting in the near future.

“The accusations he’s throwing about have nothing to do with me, I can’t control what other people say or do but you’ll not find a single thing I’ve said out of order.

“Everybody that’s in the public eye gets abuse on twitter, I’ve had plenty, if you can’t deal with it, don’t come on twitter or simply block whoever is giving you it.”

“Putting a British belt in the bin is disgusting childish and petty, then coming back with a sob story when you get abuse for doing it is classless #growup.”