Ward has the tools to beat Booth says trainer 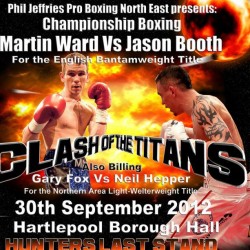 Martin Ward’s trainer, Neil Fannan, says that his charge faces his toughest career test when he clashes with Jason ‘2 Smooth’ Booth for the English bantamweight title on September 30 at the Hartlepool Borough Hall, but insists that his man has the skills to prevail.
Booth, the former British super-bantamweight champion and one-time world title challenger, lost last time out in July at Sunderland’s Stadium of Light in a WBA European title fight to Ireland’s Willie Casey, but Fannan says that County Durham’s Ward can’t read too much into that defeat.

“It’s a tough fight for Martin because I thought he [Booth] won his last fight against Willie Casey; he won the early rounds and he kept it up and I was surprised he stayed so fresh.

“So if anyone says that he’s coming off a couple of defeats, well, to me, Jason knows and lots of people know that he won [against Casey] but didn’t get the decision, and I think that’s buoyed him to take this fight.
“Obviously I want Martin to beat Booth, but I love Jason’s story; I’m a bit sentimental and I’d like to have done it without involving him but I think to get a victory over Booth will put Martin in good stead to win a British title.
“I do think Martin will beat him and I’m expecting him to beat him comfortably.  They sparred once before the Molitor fight [Booth lost on points to Steve Molitor in an IBF super-bantamweight title fight in 2010] and I know that to Martin it was like the world title and to Jason it was just another spar; but I do believe Martin has the tools to beat him.”
Promoter Phil Jeffries is looking forward to the bout that will headline his first show of this boxing season, and promises that the undercard will be exciting fare for fight fans in the North East.
“Booth and Ward are both stylish, classy boxers and this fight is going to be a great spectacle.  It’s a really even fight too and if Martin does win then he really will have arrived on the British stage.
“We’ve also got a great supporting line-up.  Michael Hunter, who lost to Jason Booth in a British title attempt in 2009 and to Steve Molitor for the world title in 2006, will probably be making his last appearance in his home town, and Peter Cope will be fighting in front of his home fans after a great victory last time out against Gavin Reid.
“We’ve also got Gary Fox and Neil Hepper fighting for the Northern Area light-welterweight title, and if it’s anything like their first fight then it will be toe to toe all the way.”
Martin Ward vs. Jason Booth for the English bantamweight title will be at the Hartlepool Borough Hall on September 30.  The undercard will include Hartlepool trio Michael Hunter, Peter Cope and Callum Winton; Fishburn’s Gary Fox; Darlington’s Neil Hepper; Horden’s Greg O’Neill; Middlesbrough’s Mohammed Waqas, and Gateshead’s Rob Ismay.
Tickets are available from all boxers, or by calling 0774 7611 020.
(John Hannen – North East Fight Scene©)