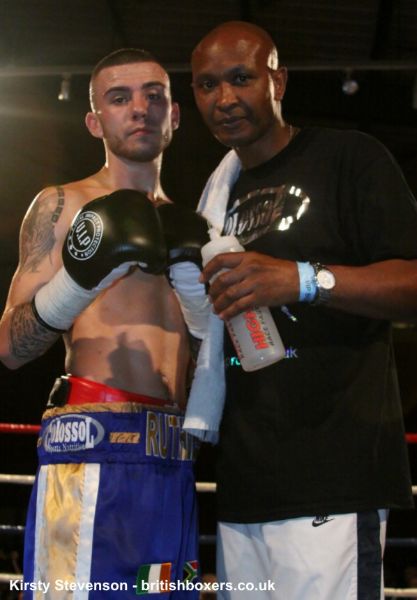 Watch Post fight Video Interviews with the Winners on Our YouTube Channel
Steve Wood’s VIP Promotions continue to lead the way for competitive Northwest small hall boxing and last Saturday they raised the bar again with a great night of competitive and edge of the seat action at Bowlers Arena in Manchester.
Terry ‘Turbo’ Flanagan was topping the bill in the first defence of his English super-featherweight title against an inspired Toy James who pushed the champion all the way in a terrific fight that was matched by the crowds support and enthusiasm from round one to round ten. read full main event article and report with pictures here
Undercard round-up from Bowlers
Liverpool Cruiserweight Louis Cuddy had his 4th professional win outpointing Simeon Cover over four rounds to get the night underway at Bowlers. – The 36 year-old Cuddy stepped in range against Cover and seemed content on staying there all night as he let the punches go. Cuddy dominated the action and ran out a deserved winner with a score of 40-36.
Former decorated amateur Jimmy ‘Kilrain’ Kelly continued his promising professional start with a fourth roun stoppage of Jay Morris at light-middleweight. It took Kelly the first few rounds to work his man out, but was patient and clinical in his approach and defensively didn’t take any chances. Constantly switching from orthodox to southpaw, Kelly looked to be enjoying the fight and looked to be happy to get some rounds under his belt.
TheWythenshawe prospect from the Champs Camp gym in Manchester, where he is trained by former British champion Ensley Bingham and Maurice Core, worked well to body and head for three rounds, but Morris was game and soaked up some accurate hurtful punches from Kelly and the Isle of Wight man never looked to hide and stood in front of Kelly all night to give him a good work-out.
Butthe night was short lived when Kelly stepped up his work in the fourth. He descended again on  Morris who covered up with an high guard after Kelly through a one two three to the head and then fired in a quick left hook to the unprotected ribs of Morris’ and he dropped to his knees.
Morris got up at the count of eight but the referee waved the fight off, giving Kelly his 4th pro win, with 3 KOs and again proving that he is a
genuine British prospect to keep your eye on. 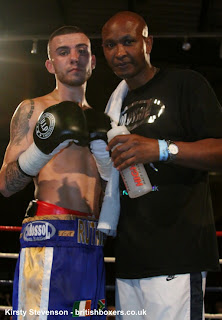 Another Champs Camp prospect appearing was unbeaten featherweight ‘Ruthless’ Ryan Doyle who again performed well to get his third stoppage in four fights against Slovakian Elemir Rafael with a third round win in a scheduled four.
Doyle, 20, is a good technical boxer who looks to have snap in all the shots he throws. his import opponent didn’t offer a lot back, but to be fair Doyle (left with coach Bingham) never gave him a chance, was dominant throughout and always in control of his work and the fight.
With Rafael having taken one too many clean shots throughout the fight and out of his depth, the referee stopped the fight in round three after another accurate left uppercut knocked his opponents head back and the fight was stopped.
Rafael wasn’t happy with the stoppage but he was never really in the fight. If you like your boxers to fight tight from a good guard and who opens everything up from behind a snappy jab and can throw every shot in the book, then look out for Doyle. 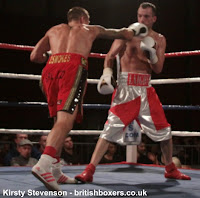 John Kays got himself back in the ring after recently parting ways with trainer Bobby Rimmer to outwork and outscore busy popular journeyman Kristian Laight over six rounds to take a verdict of 60-54 on the referee’s card.
Kays, 29, hadn’t been in the ring since December 2011, when he fought a draw with Pavels Senkovs. He unsuccessfully challenged Liam Walsh for the Commonwealth super-featherweight title in March 2011, but was stopped in the 10th round.
Although he lost to Walsh, in that fight he shown he had potential and went out on his sheild after a good display.
Kays who is now trained by Darren McCarrick, worked well in this fight and dominated Laight to take his record to 15-2-1 and will hope to keep busy and fulfill some of his earlier career potential.

Middleton’s light-middleweight Matthew Ryan was given the run around by tricky Lincoln southpaw Rick Boulter and was made to work for his 40-37 victory over four rounds.
Ryan (left) was guilty at times of waiting too long to get his shots off, but when he did found it difficult to land more than one telling shot on the
awkward Boulter who was content on making things difficult for Ryan.
But the Manchester prospect was patient in his work and relaxed and in the end finished strong catching Boulter enough with his impressive jab to take his second pro win. (2-0)

We have not seen super-featherweight Adrian Gonzalez in the ring for a while, but he returned to the ring at the Bowlers, having signed with VIP and Steve Wood after leaving Hatton Promotions.
After two and half years out after losing his unbeaten record to James Ancliff in April 2010, Gonzales put the past behind him to return with a 39-37 hard fought decision over Trowbridge’s rough house Dan Carr over four rounds. Carr was constantly warned by the referee for the dangerous use of his head and on more than one occasion both were told to tidy the action up has it got frustratingly messy at times.
Gonzales did his best to create space and try and box his man, but Carr was constantly on his chest and the heads were coming together that much, you’d have thought it was a conker fight. Gonzales’ left eye was to show the results of the dangerous use of Carr’s head and he was deducted a point. Bbut Gonzales who is coached by his dad Lee Beard, had done enough anyway and took the final verdict 39-37.
Popular Angelsey super-featherweight Mark Evans continued his fast rise through the ranks with his 7th win, but he had to work hard for it against Mansfield-based Latvian Pavels Senkovs in an exciting contest that up until the main event, was fight of the night.
Evans, 31, had a lot of support in the arena and his North Wales faithful threatened to blow the roof off with their loud support for the Holyhead man, and he didn’t disappoint them with another all action performance.
Evans started the fight at in the only gear he knows ‘fast’ and came out at the first bell letting the shots go. But the defensive frailties were soon exposed when he was wobbled by a big right back hand by Senkovs. He regained his composure though and came firing back to end the round well.
In round two though Evans really came alive and dropped Senkovs with a big right of his own around the side of the Latvian head. With his senses scrambled he got up and retreated into a defensive crouch as Evans came in to finish him off in typical high octane fashion. But credit to Senkovs he survived to see out the session.
Evans started to box a little better in the third and from behind his jab looked more composed and took control of the fight, although Senkovs was always in it and always dangerous. Evans took control of the fight from here on in and finished strong and in control, but a bloodied Senkovs made him work for this win. Evans took the referees decision 60-55. Evans remains unbeaten taking his record to 7-0, 1 KO.
There was a professional debut from Manchester light-welterweight Callum Cooke who outpointed the experienced and durable Jason Nesbitt over four rounds to get his paid career underway in a dominant and purposeful performance.
Cooke a gym mate of Terry Flanagan and trained by Steve Maylett took the fight 40-36 but found it difficult to break down Nesbitt who was content for most of the fight to cover-up and let Cooke try and find the gaps, which were very rarely there.

Cooke who looked nervous on his maiden fight and was content to get his first contest out of the way and now wants to keep busy as he gains experience and moves through the levels.

The crowd again were in a frenzy over this one, with the popular Chorley boy bringing a big following, especially a large female contingent who’s screams were defining in their support of this powerfully built prospect who is coached by Lee Beard.

Catterall started the fight at an high pace and let his punches go from the opening bell and looked to make it a painful night for the experienced Allen, who was in danger of being over whelmed on a few occasions.

But to Allen’s credit and bravery he hung in there to the end despite the his young opponents dominance and gave the debutant a good workout. Catterall took the refs verdict 40-37 on his card. – Again another promising prospect to keep an eye on in the coming years.

Ryan Doyle stopped Elemir Rafael in the 3rd round