‘Vicious’ Vivian Harris insists that British light-middleweight champion Brian ‘The Lion’ Rose will face a rejuvenated opponent unshackled of the burden of having to boil down to an unnatural weight when the pair clash at the Blackpool Winter Gardens tonight (October 5)
Guyana’s Harris, 34, enters the fight on the back of a losing streak but the former WBA world light-welterweight champion is an awkward test for Rose and he will have to be switched on here in what could turn out a tricky night.
Rose, 27, was
due to defend his belt against Londoner Sam Webb on the David Price
versus Audley Harrison undercard in Liverpool on October 13 but, after
that contest was postponed, he now steps in with Harris in a hometown seaside showdown.
With just one defeat in 22 contests, and the younger and bigger man, the smart money is on Rose to add Harris’ internationally-known name to his ledger before moving on to a rearranged date with Webb. It’s said that a fighter never loses his punch, though, and Vivian can bang.With 19 of his 29 wins coming inside the distance.
Currently at a crossroads in his career, ‘Vicious’ knows he needs to win this fight. If he loses then his future options are limited. Conversely, if he triumphs then he regains some of his former standing and gets more nights under the bright lights. A pro since 1997, and having mixed in better company than Brian, Vivian is relishing swapping punches with his English opponent.
But Rose is looking better in every fight recently and has matured into his role as British champion just nice. He as come through some hardships in his boxing career and Harris could make things difficult here again for the lion. But Rose should again bite down on the gum-shield to take a well deserved points victory in-front of his hometown fans and move a step closer to that fight with Webb.
Appearing alongside Rose on the Blackpool show will be three of the seaside town’s rising boxing stars – cruiserweight Matty ‘Assassin’ Askin; and undefeated prospects Adam Little and Scott Cardle. In what promises to be a great night for North West fight fans, this will be the first and, most likely, last time these four fighters all appear on the same card in their home town.
Also appearing on the bill will be unbeaten Liverpool prospect James ‘Jazza’ Dickens, and crowd favourite Jeff Thomas from Lytham St. Annes.While the show will also be a memorable occasion for Steve Lewis, Issac Lowe, Scott Moonan, and Lee Crossland, who are all set to make their professional debuts. 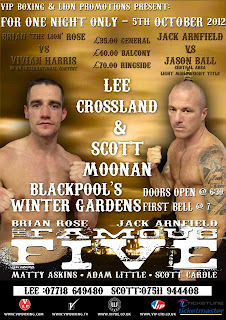 Chief support is the highly rated prospect Jazza Dickens in his first 8 round contest against a durable Nicaraguan , s supported with Matchroom prospect Scott Cardle , Hatton talents Adam little and Matt Askins , Lythams Jeff Thomas and 4  quality debutant’s  it makes the show really worthy of a live TV date on its own.
On the bill – There are debuts for Birkenhead Venture Boxing pair Scott Moonan and Lee Crossland, who are trained by Sean Trodden and Danny Kelly. Both are from Southport and coach Kelly says they
travel everyday from Southport to be part of venture team and both are looking forward to making there professional bow on the Blackpool card with the Venture team having high hopes for their future.
Tickets priced at £35 (General), £40.00 (Balcony) and £70 (Ringside) are available from all boxers (balcony seats from the venue only) or at www.vipbe.co.uk