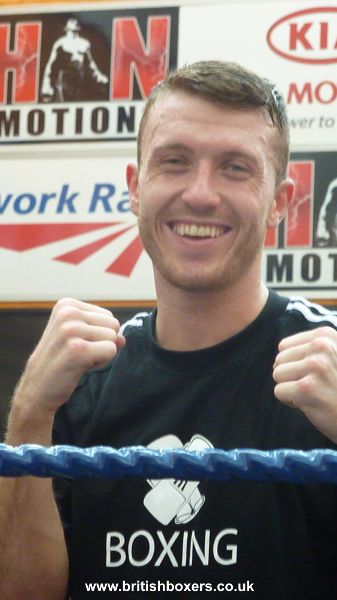 Lytham St Annes light-welterweight prospect Scott Cardle outpointed Frenchman Karim Alilice, 60-54 over six rounds and was very impressive in doing so, on the undercard of Kell Brook’s win over Hector Saldivia at the Motorpoint Arena in Sheffield on Saturday night. Cardle, 23, is trained by Joe Gallagher in Manchester and turned professional in March this year and already has had 7 fights, this is a lad in a hurry doing it the old school way. His next fight will be on the undercard of Carl Froch’s world title fight against Yusaf Mack in Nottingham on November 17.
Cardle was a class amateur with impressive credentials which included a bronze medal at European Games in 2009 and reached the Quartler finals of the World Amateur Championships the same year before losing to eventual Gold medal winner Roniel Iglesias.
But after missing out on the 2012 Olympics he decided to turn professional and what a good move that looks to be for him and the boxing fans.
If you didn’t see Cardle’s latest fight against Alilice on Saturday above is the full fight video. I recommend if you like your boxers to throw combinations using every shot in the book to head and body without taking much in return, good movement and quick in and out footwork, with great reflex defence, then Scott Cardle is someone to keep an eye on. Saturday’s performance was top rate and we look forward to seeing more of him, once every month by the looks of it!
Other undercard results from The Motorpoint Arena in Sheffield 20th October 2012