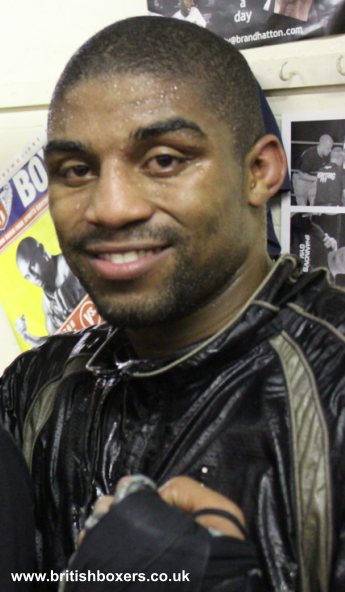 Manchester’s Denton Vassell (146½lb) recently scored a big win over undefeated northern rival Ronnie Heffron (146¾lb) at the Manchester Arena to retain his Commonwealth welterweight title, keep his ‘0’ intact and remind boxing fans why he was so highly rated when turning professional back in 2006.  The 28-year-old shook off a year’s worth of rust in the early rounds before uncorking a pair of uppercuts, left and right, in round six that stiffened the 22-year-old’s legs, prompting referee Mark Green to step in at 1:56 of the round.
Vassell, 20-0 (10), has had a tough few years.  His father, Mancell, passed away prior to his Commonwealth title defense against Bethuel Ushona in March 2011, a further successful defense against Samuel Colomban was overshadowed by the death of a beloved aunt, and the lack of action thus far in 2012 left many questioning Vassell’s long-term future.

Still, the champion’s luck began to turn when he celebrated the birth of his son last year and the new sense of responsibility has helped Vassell maintain a keen sense of focus, which was honed when terms were agreed for the make-or-break meeting with Heffron.
“You know me, you’ve seen me at the gym — I’m always in training,” said Vassell when speaking to BoxingScene about the win.  “I knew I had him from round one.  I was really confident.  Watch it again for yourself and you can see how relaxed I was.  There’s even more to come.  This is the start for me, it can get better and it will do.  I always put work in at the gym, so I knew I had that in me.
“I was waiting for those uppercuts.  It was a perfect stoppage from the ref — if he’d have carried on then I’d have been all over him.  There’s no way he’d have won against me, so it was the right moment.”
Heffron, now 11-1 (5), was seen as the slight favorite in some quarters, Vassell’s inactivity, plus rumors that he had lost some of his focus and desire due to his recent tough times, was seen as one of the keys to the destiny of the fight.  Vassell, though, believes that the fight was his from the moment the contract was signed, telling me that he had always viewed this as his chance to make a statement of intent.
“I didn’t feel any pressure to take this fight,” he said.  “I knew it was a big fight because it was Heffron.  I felt that if it went to a decision then I wouldn’t get it because he is the big prospect and I was seen as an underdog who hadn’t fought in a year.  I knew it was all against me, but I knew he couldn’t go 12 rounds with me.  It was too soon for him.  Now I want the British, I want the European and I want the world titles.
“I’ve made the statement that I needed to make.  It is the type of win that puts me back out there again.  People thought I was gone, that I’d lost interest in boxing, and they all made me the underdog.  They thought I was rusty, that I’d struggle and it was a chance to get my Commonwealth title, so I just trained even harder.  I trained harder for this fight with [trainer] Bob [Shannon] than Ronnie’s trained with [his trainer] ‘Arnie’ [Anthony Farnell] or in his whole life.”
Towards the end of his amateur career, Vassell did a few sessions with Farnell, but by the time of his ABA win in 2006 he had settled down at Bob Shannon’s Fighting Fit gym and has remained there ever since.  Farnell discussed his inside knowledge of Vassell during the build-up to the fight, which poured more fuel on Vassell’s fire.
“The only thing that annoyed me was the little statement ‘Arnie’ made about how he’d taken me on the pads and that I was too slow, wasn’t powerful and he said I just look for the knockout, but it never comes,” he said.  “I boxed fast last night, I was powerful and I destroyed his star pupil.  It was really hard for Bob when Ricky [Hatton] lost, so it came down to me to lift things up.  Bob’s proud today, he’s really happy.
“No disrespect at all to Heffron — he can come back if he learns from this.  You and I know that this is just the boxing game, you go back to the drawing board, work on things and come back.  I learned from last night’s fight as well, I saw little mistakes to work on for the next time.  There were good things, people thought I’d rush, my timing would be out and that I’m a brawler, but I left the ring last night after showing skills, speed, strength and fitness.  There’s always little things to work on, so I’ll look at last night properly and learn — I’m a good learner.”
The fight’s finish was reminiscent of Lennox Lewis’s KO win over Justin Fortune.  Lewis smashed in three uppercuts to end that one and, for a split second, it looked like Vassell was about to pull the trigger on a third uppercut with his opponent dazed and helpless.  The third shot didn’t come, a sign, perhaps, that Vassell is still a bit too laidback to be a top-class finisher?
“That’s the one thing people are going to have to put to one side now,” answered Vassell when asked if he is too nice a guy to follow in the footsteps of Jack Dempsey and Mike Tyson, his ring idols.
“I know I’m a laidback lad and sometimes that came into the ring with me, but that’s gone now. I’ll still be laidback outside the ring, but I’m ready to destroy people and get going now.  I was actually going to hit him with a left hook after those uppercuts because we trained for that, but I didn’t get to throw the punch.  Either way, it would have ended after those shots because the shots were very solid, very effective and people saw that themselves.  I don’t think anyone expected them to be that effective.  I think I could have done that a lot earlier as well if I hadn’t have been out so long.”
Please send news and views to neckodeemus@hotmail.co.uk or Twitter @Terryboxing.
courtesy of Rick Reeno www.boxingscene.com