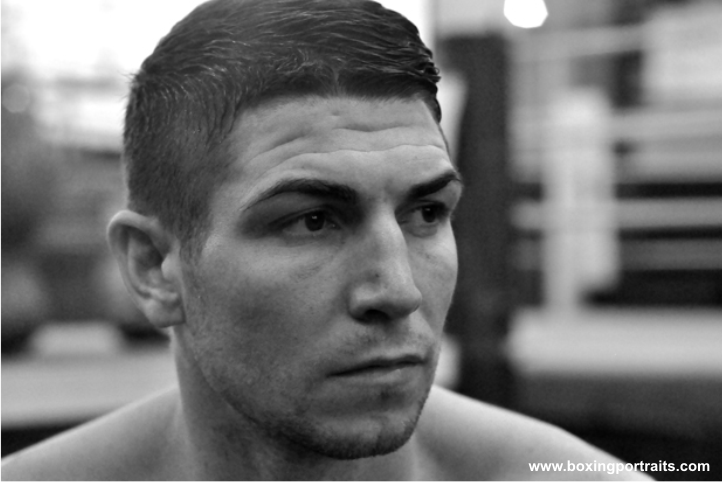 Blackpool’s Brian Rose is a shining example of the art of bouncing back from adversity.

The recipient of a brutal sixth-round KO reverse to Max Maxwell in May 2010, Rose has risen to the top of the domestic 154lb division since that torrid night at Huddersfield Leisure Centre; his British title win over Prince Arron in December, not to mention his decision to ask for and secure a March 31 rematch with Maxwell, a testament to the new champion’s will to win.

Rose’s defeat to Maxwell wasn’t the only brush with misfortune in the 27-year-old’s six-year, 18-1-1 (5) career.  A TKO stoppage over Jason Rushton in the final second of the tenth and final round of their gruelling October 2009 BBBoC Central Area light-middleweight title encounter led to tragedy as Rushton was rushed to hospital with bleeding on the brain after collapsing in his dressing room.
As the news filtered through to ringside, one or two lingering question marks over the timing of the stoppage were brushed aside, referee Steve Gray proving beyond doubt that it is never too late to stop a fight if you think a boxer is in difficulty.  Rushton was taken to hospital and later placed into a drug-induced coma.  Rose was one of the first visitors.  When I caught up with Brian just a few weeks after the bout he was still struggling to come to terms with the injuries he had inflicted.
“I was devastated when I visited Jason in hospital.  I burst into tears when I saw him and I saw that his girlfriend (Nadia was) pregnant,” said Rose when speaking to me about the ordeal during a November 2009 interview.  “Nadia told me that it isn’t my fault and reminded me that it is the sport and it could have easily been me.  You go into a fight and the other guy is coming at you looking to land his shots and trying to hurt you to win, not to send you to hospital.  You never think it will happen, so when it does happen it really hits you…I’m a nice guy and I would never go into the ring to hurt anyone.  You are not just hurting Jason when this type of thing happens, you are hurting his mum, his dad, his girlfriend and his kids.”

Thankfully, though, Jason pulled through.  Rushton’s boxing career is over yet the former Central Area title holder can take a measure of comfort from Rose’s ascent to the British crown as it was the fight with ‘The Rocket’, and the aftermath, that forced Rose to make some major changes; although ‘The Lion’ had to endure the pain of defeat first – the loss to Maxwell was his first fight following the battle with Rushton.
Wins over Terry Carruthers, Lee Noble and Martin Welsh led to that British title crack at Arron.  However, the wins themselves only tell part of the story of Rose’s comeback, with the fighter taking an unusual step in the wake of the Maxwell fight in order to come to terms with the after effects of the win over Rushton.
“I started seeing a psychologist [Emma James] after the Max Maxwell fight,” said Rose.  “She has helped me calm down (before fights) as well.  If I have any worries or problems I go to see her.  Plus [trainer] Bobby [Rimmer] was calm in the corner all the way through the fight with Arron and that is what I needed.  Every time I went back to the corner, Bobby told me to keep a lid on my emotions and do what I was doing.”
Rose had talked to me at length about his work with Emma James on the night of his comeback win over Birmingham’s Carruthers.
There was an immediate and noticeable change in Brian’s demeanour as the man often deemed ‘Too nice to be a boxer’ spoke about the demons that had been rattling around his brain since the Rushton fight and which helped contribute to the loss against Maxwell.

Now finally at peace with both his role in the Rushton encounter and the sport’s hard realities, Rose can barely believe that it took a tragedy to prompt him into honing the mental side of his game.

“I would suggest it to any boxer,” said Rose to my question of whether consulting a sports psychologist was an extreme step, “because boxing is not just about the physical side, it is about the mental side of things as well and it helps.  You can train as hard as you want but if there’s a problem in your head you won’t perform.”

Ironically, Arron appeared to wilt in the face of Rose’s serene confidence; the 6’ 3’’ champion kept mentioning a sparring session between the two that Rose had bossed.  The recently crowned king insisted that he had improved dramatically since those rounds.  Rose, though, felt that Arron’s decision to talk about their sparring sessions hinted at a lack of confidence, giving the challenger a vital boost.
“I think it affected him because every time he spoke about the fight he mentioned that it had been a while since the sparring,” recalled Rose.  “I wasn’t going to mention it at all because it was two-years ago and you have big gloves on plus sparring and fighting are different.  I think it did affect him because you can almost see mentally that he felt he couldn’t win the fight that night.”
Rose’s Zen outlook managed to stay intact when the MC announced that one judge, Phil Edwards, had given the bout to Arron by a score of 115-114.  Rose, however, remained serene, his shock at Edwards’ card tempered by happiness when tallies of 116-113 and 117-113 from Victor Loughlin and John Keane respectively handed him the title by the most unlikely split-decision since James Toney dominated Merqui Sosa only for one judge to get it hopelessly wrong.
“It didn’t matter because I had won the title, but I was shocked when they read out that score,” laughed Rose.  “I thought it was going to be one of those nights.  I had myself winning by seven or eight, but the judges had it closer – I thought I won it clearly.”
The business of boxing is all about winning, often at any cost, but the sporting side of the ‘sweet sciences’ hinges on the camaraderie between the combatants – one of the most heart warming things about boxing is the traditional post-fight handshake and hug.  Rose may have added a harder edge since losing to Maxwell yet he is still one of the nicest fighters in the game.
“I cried with Arron after the fight!” said Rose.  “I went to the changing room and he was upset.  I put my arm around him and told him he’d come again.  I am 27, Arron is 24 so I had to win this fight and move on with my career.
“Winning that fight is the biggest achievement in my boxing life.  It is massive because I’m the first British champion from Blackpool since Brian London.  Blackpool hasn’t had this for decades; taxi drivers and strangers are letting on to me.  It is a nice feeling.  If I only end up as British champion then I’ve done more than I could have dreamed of.  When I was 9-years-old I dreamt of this, but I don’t think I will stay at British level, I want to get the European belt and move on.”
Maxwell has other ideas; the 32-year-old recently told me that his KO of Rose was on the cards from the early rounds.  ‘Mad Max’ insists that he knows how to beat Rose, saying that he proved it decisively in their first encounter and will do so again.  Rose dismissed this idea by pointing out that he had campaigned long and hard to net a return with the Jamaica-born, Birmingham-based puncher.
“I wanted to fight him from the moment I won the title,” stated Rose.  “My manager [Steve Wood] said I could fight Sam Webb or Matthew Hall, but I have a loss on my record to Max and wanted to put that right or else I couldn’t move on with my career.  Max has been asking for it since he beat me, now there’s the British title and plenty of money at stake – I have to keep hold of this title for my family, not just for me.
“I know I wasn’t right when he beat me.  I wasn’t mentally ready to fight and it took the knockout for me to know that.  I am glad I got knocked out because if it hadn’t have happened I wouldn’t have seen a psychologist and wouldn’t have won the British title.”
Indeed, Rose has come a long way since that battle with Rushton and the loss to Maxwell; the man once deemed too laidback to go all the way has found a way to balance his even temperament with the demands of a brutal business and is reaping the rewards.
By Terence Dooley
Boxing Monthly magazine and UK Editor at www.boxingscene.com
Courtesy of Ricky Reeno