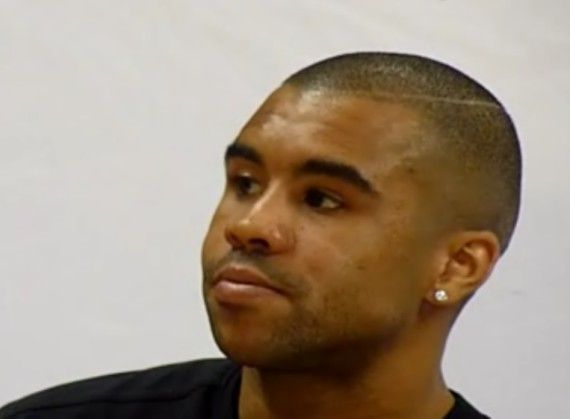 After a nine-year professional career a tearful Rendall ‘2Tone’ Munroe today announced his retirement from boxing at a press conference in his beloved Leicester City football ground The King Power Stadium.
Rendall. 32, decided to hang up his gloves following only the third defeat of his career last month, when he was stopped for the first time in his career by current British and WBA interim super-bantamweight champion Scott Quigg.
A former world title challenger the ‘Boxing Binman’ held the English, Commonwealth, European and WBA international titles and was a fans favourite, not just in his home city of Leicester but with boxing fans across the board.
“Its official I’ve retired today. But would like to give a big big thanks to all my fans who made my career a great one and one to remember.” said Munroe.
“The end is here. It’s hard, but I’ve enjoyed it.
“What more can I say, didn’t think it would ever come to an end. I’m a laid-back character who doesn’t take himself too seriously, but boxing is the one thing I have always taken seriously.
“Throughout my career, I did everything that was asked of me. I won every belt available except a world title, but I put on a show for the fans. I wanted a rematch, but things didn’t work out and that’s why I think it’s time to call it a day.”
Southpaw Rendall turned professional in September 2003 with a 3rd round stoppage over Joel Viney in Nottingham. After his 14th fight he won his first title, the English strap in a 6th round defeat of Marc Callaghan in October 2007. In his next fight ‘2Tone’ added the European belt to his waist when he outpointed the unbeaten Spaniard Kiko Martinez in March 2008.
After five successful defence’s of the European, he claimed the Commonwealth title by outpointing Isaac Nettey in May 2009 and then won a world title eliminator contest over Victor Terrazas via a 9th round KO, which set him up for his world title challenge against Japan’s WBC super-bantamweight champion Toshiaki Nishioka. Rendall had to go to the champions home country for his big chance and on that day in Japan on the 24th October 2010, Rendall gave it his best shot, but came up against a champion in form and in his prime and the Leicester man just lost out on points over the twelve rounds, but did himself proud and even though he lost the fight, came out of it with credit.
Rendall returned after the Nishioka loss to win the WBA International belt against Andrei Isaeu and after three good wins he challenged fellow Brit Scott Quigg for the interim WBA super-bantamweight belt in June 2012. After a good start to the fight Rendall suffered a very bad cut above his right eye after a clash of heads and the fight was called a technical draw.
A rematch with Quigg was re-arranged but in the return Rendall came up short against the impressive Mancunian and was stopped in the 6th with body shots. It was the fight and result that persuaded Rendall that it was time to call time on his fight career. Munroe had hinted that he was considering hanging up his gloves in the immediate aftermath of his defeat to Quigg in Manchester last month on the undercard of Ricky Hatton’s comeback loss to Vyacheslav Senchenko.

Discussions with his family, manager Mike Shinfield and trainer Jason Shinfield since then confirmed that feeling.
“It is two years since Japan and I haven’t really had the opportunity since then to fight for a world title again,” Rendall said.
“The opportunity to win more titles is withering away and that is why it is time to call it a day.
“It has been a very difficult decision. I’ve been boxing for 16, 17 years. Boxing is a selfish sport and now I have to sit back and think about the time I can spend with my family.”
We will never forget them Hi-Viz fluorescent lighted nights when Rendall thrilled his fans who adorned the Binman workwear which Rendall made a fashion must for the faithful ‘2Tone’ army. Rendall will always be remembered as a charismatic, dedicated and exciting boxer who always gave his all and other than that world title eluding him, he more than excelled in his chosen sport and boxing will be a lesser place without the Boxing binman who ends with a career with a respectable record of 24-3-1, 10KOs.
Rendall thanks and all the very best for the future.
Full Munroe Retirement Press Conference Video