It was a disappointing end to a fight that had all the makings of a classic and was starting to turn into something that could resemble the pre-fight expectations.

But an accidental clash of heads in round 3, ended the spectacle when Rendall Munroe suffered an awful cut across his right eyebrow and the referee with advice from the ringside doctor called it off.

Munroe the No1 rated super-bantamweight in the country against the No2 Scott Quigg, had everyone in attendance on tenterhooks and the atmosphere in the Velodrome Arena was fever pitch as the two gladiators entered the stage to a deafening mixture of claps, cheers, boos, screams and the rhythmic beat of a Munroe fans drum that echoed around the Manchester Cycling home.

This one had the big time boxing feel and rival supporters challenged each others lung capacity, with Munroe’s Leicester fans matching Quigg’s bigger home support.


No one beforehand could pick a winner for sure and the 50/50 fight tag was applied often, when speaking of this potentially explosive clash between two proud boxers who were willing and brave enough to lay it all on the line to be the best of the best.

Unfortunately after two feeling out rounds that you could argue either way, the third saw the fight come to a sudden halt, when a ghastly cut appeared on Munroe’s right eye, splitting his eyebrow in two. It was bad! deep, long and above the eye. It didn’t take the referee or ringside doctor long to realise just how bad and the fight was over.

In the opening round Munroe had stalked Quigg on the front foot and landed some decent hooks from head to body and looked comfortable. Quigg kept his jab pumping out and was shifting his feet quickly staying out of range enough to avoid Munroe’s left hand. The two telling punches as far as I could see were a lead left uppercut from Munroe and a right hook from Quigg, that both landed on each others chin and on my card evened up the opener.

Quigg’s punches looked the sharper in the second and he was throwing each one with stiffness and power, a big right hook from Quigg got through clean and he then went back behind his stiff jab. Quigg looked to be finding some timing. Munroe continued to hunt the Manchester man, but Quigg’s swift footwork and movement was not giving Munroe enough time to set himself.

Quigg was picking his shots well here and a combination to head and body ended the round in Quiggs favour, it turning into an interesting battle of styles.

The third round ended just seconds after it had began, Quigg threw a right hand that hooked around Munroe’s head, bringing it down into Quiggs and resulting in the cut. It was a frustrating end for the fighters and everyone involved and the fans in attendance were stunned. But everyone who saw the nasty cut, after grimacing agreed the fight had to be stopped.

A rematch is a formality, but it wont be happening anytime soon. The cut will need a long time to heal up and could be a future problem for the Leicester man, such was the damage occurred. Quigg will not want to hang about and wait for Munroe and will look to have a fight or two before an inevitable return.

Both expressed their desire to get a rematch on as soon as possible after the disappointing end to their interim WBA super-bantamweight title clash.

Referee Howard Foster adjudged it fairly to have been an accidental clash of heads and as the contest had not gone four rounds, it was announced as a technical draw.

Hatton Promotions are hoping they can arrange another meeting between the pair when Munroe’s cut is fully healed after the summer following the unsatisfactory ending at Manchester Velodrome on Saturday night.

“I can’t wait to go again,” said Munroe. “It’s a game of these things happen and you just have to go with it.”

Quigg also admitted his desire to go again as he claimed his game plan was working well as he allowed Munroe to come on to him and tried to pick his man off.

He said: “We both want to prove who is number one and the point is not proven so we both want to fight again.“I felt in control. The second round I was just getting into it and everything was going to plan and I believe it was going to be my night.”

Ryan Rhodes failed to become a two-time European champion when he was stopped in round 7 by Sergey Rabchenko after getting caught with a left hook to the body at the end of the round.

Rhodes, 35, from Sheffield a former two-time British belt holder had his moments in the fight and I thought was doing pretty well until the finish even rocking the Belorussian to his boots at one point in round 3. Rabchenko was not put off by Rhodes’ seemingly more powerful shots as he continued to push the Sheffield man back against the ropes.


Rabchenko always looked like he could step up what he was doing and as the fight went on he looked stronger and eventually got to Rhodes. An exchange of punches saw a freak left hook the rib under the breast bone it seemed. Rhodes in agony on the canvas got to his feet at nine, but the fight was stopped. Rhodes afterwards said; he intends to fight on and get over this defeat.

Sheffield heavyweight hope Richard Towers had an hard nights work against Frenchman Gregory Tony for vacant EU heavyweight crown, but pulled out a 9th round stoppage victory after surviving an onslaught in the fifth round that nearly had him over. Towers had to dig deep to get through this one.

Any talk of fighting David Price and Tyson Fury for the time being should be put on the back burner for now and big Richard needs to polish up, if he is to move on from this level. In the end he dug deeper than ever to prevail.

The referee in the fight was terrible and I didn’t and he didn’t seem to know what he was doing! On more than 3 occasions, I remember thinking he had stopped the fight in Tony’s favour, only for him to resume the action? He needs looking at, who was he and what was he doing there?

Towers shown his Sheffield steel to stay in there and get through the hardest fight of his career. 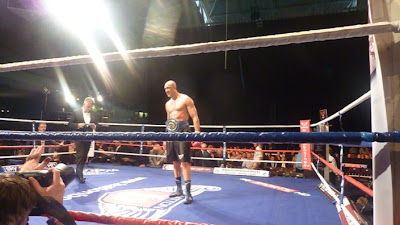 All in all it was a good show with some good fighters showcasing their skills, some on the up, some on the slide and some with plenty of questions that still need answering.