Groves heads out to Las Vegas 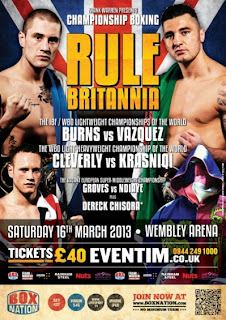 Super-middleweight star George Groves leaves behind a freezing Britain and heads to the  heat of Las Vegas for a training camp and also to watch his stablemate Selcuk Aydin in action in the fight capital.
Groves is preparing for his Vacant European title challenge against tough Mohamed Ali Ndiaye on Saturday 16th March at Wembley Arena in Britain’s biggest boxing event of the year, featuring stars Ricky Burns, Nathan Cleverly, Dereck Chisora* and Liam Walsh, all live and exclusive on BoxNation (Sky Ch. 437/Virgin Ch. 546).
The Hammersmith southpaw will be ringside at the Hard Rock Cafe to see Aydin take on Mexican warrior Jesus Soto Karass on the undercard of the Interim WBC World Light-Welterweight Championship between Lucas Martin Matthysse and Mike Dallas Junior, a fight that can be seen live on BoxNation this Sunday morning from 2am.
Undefeated Groves has been training alongside Aydin at the Hayemaker Gym in South London as both are under Adam Booth.  Turkish born Aydin is one of the best in Europe, winning European, WBC International and WBC Silver titles.  In July last year he gave Floyd Mayweather’s next potential opponent Robert Guerrero a hard twelve round battle in their WBC Interim world title fight.
“I’m looking forward to getting out of Britain for a while and heading somewhere warm to train before my European title fight and with Selcuk fighting this Saturday it was the perfect time to go,” Said Groves.
“Selcuk has been training with us for a while now, he’s super-strong and bullish.  It will be an exciting fight against Soto, but I can Selcuk winning this one.  It’s a fan’s fight, they’re both action fighters, both have good records and they like throwing plenty of spiteful punches,”
“With just over seven weeks to go I’ll be getting in plenty of mountain runs and gym work to prepare for Ndiaye and then finish off my training back in London.”
And Groves will also be looking forward to seeing the American fans’ as it’s his first appearance there since beating Francisco Sierra in a thriller last July in California and also the legendary Glen Johnson in December in London.
He added, “I got a great reception from the fans after beating Sierra, a tough Mexican, in what was a great fight and then I beat a great and well known name like Johnson at the end of last year in what was my best performance to date so it will be good to see how my reputation has grown over there.”
*Dereck Chisora’s appearance on the show is strictly subject to him being successful with his license application to the British Boxing Board of Control.
Tickets for Rule Britannia, priced at £40, £50, £75, £100, £150 and £200 are available from Eventim on 0844 249 1000 or www.eventim.co.uk
Rule Britannia is live and exclusive on The Home of Champions BoxNation (Sky Ch. 437/Virgin Ch. 546).  Join at www.boxnation.com