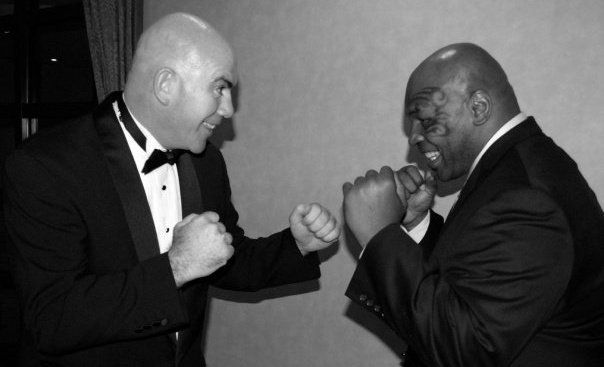 Mark Reynolds on bodyguarding Mike Tyson and being a coach 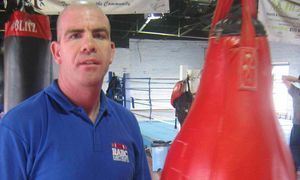 Former Amateur boxer Mark Reynolds was able to travel side by side with one of his boxing heroes Mike Tyson, after only 15 minutes training on the etiquette of bodyguarding.

Imagine your boxing hero is Mike Tyson and you get asked if your minibus can be used to pick him up from the airport to carry his luggage for his UK tour, opening up a slight chance of meeting him?

Mark Reynolds did not have to imagine this as his dreams of meeting one of his idols came true. Mark’s friend asked if he could use his minibus to pick Mike up and Mark weighed in on an opportunity. He insisted that he could only use the minibus, if Mark drove it himself which his friend duly agreed on.

The idea of being Mike’s chauffeur for the tour was exciting enough for Mark but when he got to Heathrow, he found out the promoter of the tour had not hired any security. It was lucky that Mark had his suit with him, as that and 15 minutes of training was enough for him to become Mikes bodyguard for the tour.

“We travelled the UK and did 2900 miles and met lots of celebrities. They all thought I was this big bodyguard, it was quite funny.”

Mike Tyson has proved on many occasions in the ring that he is not a man to be messed with. During the tour, Mark was able to get to know Mike personally and had a lot of time one to one with him. He was able to stay on the right side of him and says he was only threatened once but this was only in jest. 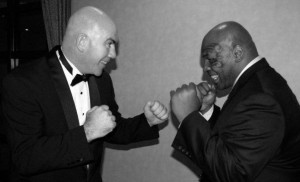 Mark with Tyson – by Bob Dyson

“Mike had a beautiful wife at the time called Kiki and she wanted to go for a swim in the spa. As I was the only one to accompany her down to the spa as security, poor old me had to go and keep an eye on her. Mike threatened me and told me not to look whilst she was swimming. It was good we could have a bit of banter.”

Mark never went pro as a boxer as at the age of 24 he quit the sport to run his own business. As boxing was his passion, he left that business to set up another one, which is where he is now. He is currently running Rawthorpe Amateur Boxing Club in Huddersfield and is also a qualified coach there teaching all ages and running up to 19 classes a week with over 300 members. The idea of running a boxing club was not only built on passion for the sport, it was also due to an incident with his son.

“My son knew I used to box and one day he said he wanted to do it himself. I slightly discouraged him as you really have to want to do boxing, not just because your dad or uncle use to do it. I took him to a gym and sat and watched him train and all they did was knock hell out of each other. It wasn’t marshalled or looked after at all so I went home and had the idea of setting my own gym up.”

£500 was all Mark was given in funding from a regeneration group called DRAM to set up his club at Rawthorpe high school. Due to the popularity of Mark’s classes, they outgrew where they were based so had to move to the Gas Club in Huddersfield but still kept Rawthorpe as the name as that is where they started.

12 years later and Mark has not been able to clinch any funding whatsoever from the government and runs the club off subs from members alone as the coaches work on a voluntary basis. Despite the success of the Olympics and the promise of an Olympic legacy of giving grass roots sports more money, this has not happened and having no funding has frustrated Mark for a number of years as he believes he could do so much more for the community if the funding did come their way. 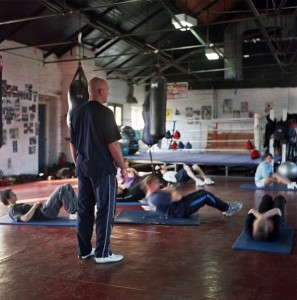 “Boxing is a great tool for discipline and helps educate children on the morals of life. I’ve seen massive changes from the people that come in and I have even had the Police come down telling me that the people on their books have a more positive outlook on life. Boxing is not the magic answer but it does help.”

From trying to knock someone out week in week out, to bodyguarding one of his heroes. It is safe to say Mark’s life so far has been eventful. At the moment, teaching discipline and keeping kids from causing trouble on the streets is high on his priority list. However, if much needed government funding does not come his way, then the club could be on the ropes but there is always hope and Mark has never been one to throw in the towel.