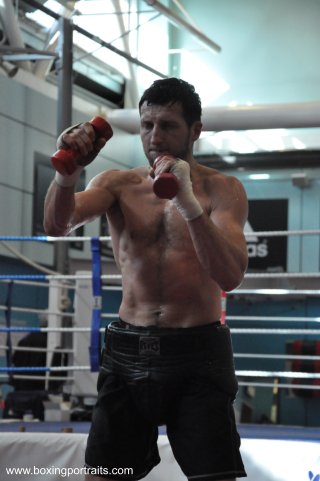 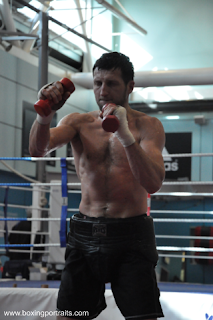 The sensational, upset KO over Bute showed how special Froch can be and there surely is further magic to come (Froch recently stating that he may continue to fight until he has turned forty!) But what are “The Cobra’s” five best ring performances thus far in his thrilling, throwback pro career?

For what it’s worth, I give my five picks here:
1: TKO 5 Lucian Bute. May, 2012.
No-one saw this coming! If Froch was to somehow take away the Romanian-born Canadian’s unbeaten record and IBF crown, the former two-time WBC boss would have to go through hell and battle harder than ever to win a close, gruelling, perhaps career ending decision. The 30-0 southpaw, big for the weight, was known as a lethal body puncher and he had stopped 24 of his victims. Froch, the tough fights having caught up with him, was meant to be the biggest name yet on “Le Tombeur’s” spotless record.
Instead, in one of British boxing’s special nights, Froch manhandled the visiting fighter in quite stunning fashion. Coming out faster than ever, Froch proceeded to back Bute up, hurt him with big shots and take him into a painful world he had never been before. Bute, overwhelmed and showing it, took a shellacking in the 3rd, was badly hurt again in the 4th and was finally blasted into helplessness with barely a minute gone in the 5th. Drooping on the ropes totally beaten, Bute was saved by his corner. The sold-out Nottingham Arena erupted, an unforgettable victory witnessed.
2: TKO 12 Jermain Taylor. April, 2009.
A genuine thriller that proved a sensational hit with the fans. Froch, making the first defence of his newly acquired WBC title, was knocked down for the first time in his career in the fight with the former middleweight king. Early on, the idea of “The Cobra” going to the backyard of “Bad Intentions” looked a bad idea.
Trailing on th cards going into the final round, Froch gave us one of his most incredible finishes, as he scored one of the most amazing turnarounds in many a year. With just 14-seconds left in the fight, the powerful and determined fists of Froch battered Taylor to defeat. This one ranks up there with Jake La Motta’s legendary 1950 come-from-behind win over Laurent Dauthuille.
3: WU12 Arthur Abraham. November, 2010.
Havin won one fight in the “Super Six” tourney and then lost his second appearance, Froch needed to beat another former middleweight ruler in “King” Arthur to keep himself in the competition. Froch the smart boxer turned up in Helsinki, Finland, and he proceeded to both befuddle Abraham and confound his critics. Simply put, Froch gave the mighty Abraham a boxing lesson.
4: WU12 Jean Pascal. December, 2008.
Froch’s first classic and in the opinion of many his greatest action fight so far. Both “The Cobra” and Pascal were unbeaten and, in front of his hometown fans, Froch was determined to stay that way. The two warriors went to war with reckless abandon at times, sending shivers down the spines of fight fans the world over. A genuine contender for that year’s best fight, Froch-Pascal saw the two rivals batter each other so much that they earned each other’s respect – to the point where a handshake agreement promised a return fight.
5: WM 12 Glen Johnson. June, 2011.
Froch, taking on late replacement “Super Six” entrant Glen Johnson, wanted a stoppage, but he instead had to settle for a closer than expected points win over “The Road Warrior.” Still, Froch never really let anyone down, as many have tried to take out the teak-tough (an overused cliché, but totally apt in describing Johnson) Jamaican, only to have to go the full route. Froch, youth and zest on his side, looked a clear winner, only to see one judge score the 12-rounder a draw. “The Cobra” won with something to spare, despite failing to do what Bernard Hopkins did when he halted Johnson in 1997 (the only man to have ever done so.)
Now, can Froch go on to take care of Mack, and then get revenge over Kessler and Ward!?