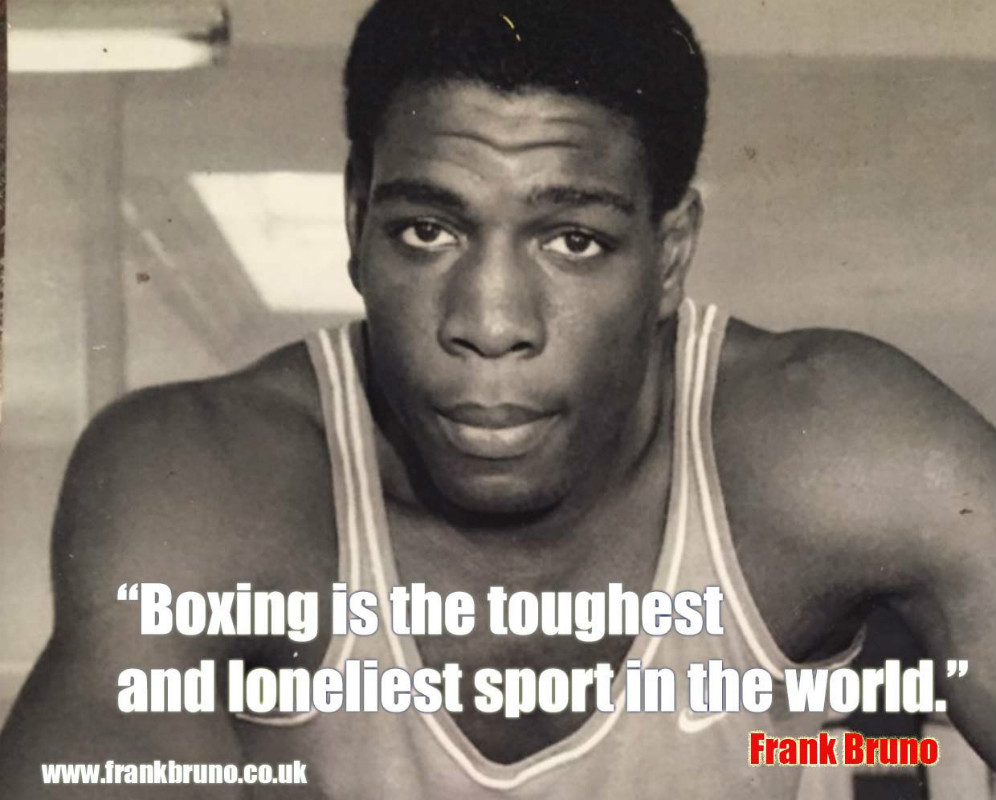 To see a man beaten not by a better opponent but by himself is a tragedy.]
Cus D’Amato

To be a great champion you must first believe you are the best. If you’re not, pretend you are.
Muhammad Ali

It’s the repetition of affirmations that leads to belief. And once that belief becomes a deep conviction, things begin to happen.
Muhammad Ali

To win takes a complete commitment of mind and body. When you can’t make that commitment, they don’t call you a champion anymore
Rocky Marciano

The man who has no imagination has no wings.
Muhammad Ali

Life doesn’t run away from nobody. Life runs at people.
Joe Frazier

A champion shows who he is by what he does when he’s tested. When a person gets up and says ‘I can still do it’, he’s a champion.
Evander Holyfield

You don’t think. It’s all instinct. If you stop to think, you’re gone.
Sugar Ray Robinson

When I was a young fellow I was knocked down plenty. I wanted to stay down, but I couldn’t. I had to collect the two dollars for winning or go hungry. I had to get up. I was one of those hungry fighters. You could have hit me on the chin with a sledgehammer for five dollars. When you haven’t eaten for two days you’ll understand.
Jack Dempsey

It’s hard to be humble, when you’re as great as I am.
Muhammad Ali

He can run, but he can’t hide
Joe Louis

If you control it, you can make good use of it. But if you lose control, it will kill you.
Jose Torres

The fight is won or lost far away from witnesses – behind the lines, in the gym, and out there on the road, long before I dance under those lights.
Muhammad Ali

Let the other guy have whatever he wants before the fight. Once the bell rings he’s gonna be disappointed anyway.
George Foreman

I love boxing and it did a lot for me. But sometimes it made me think how savage human beings could be to each other. That wasn’t the kind of boxer I wanted to be. My strategy was to be as scientific as I could when I fought. I didn’t want to be seriously hurt, and I didn’t want to do that to anybody else either.
Muhammad Ali

A champion is someone who gets up when he can’t.
Jack Dempsey

I’m scared every time I go into the ring, but it’s how you handle it. What you have to do is plant your feet, bite down on your mouthpiece and say, ‘Let’s go.’
Mike Tyson

Boxing is the ultimate challenge. There’s nothing that can compare to testing yourself the way you do every time you step in the ring.
Sugar Ray Leonard

The bigger they are, the harder they fall.
Bob Fitzsimmons

Once that bell rings you’re on your own. It’s just you and the other guy.
Joe Louis

Inactivity is the biggest sin in boxing.
Sugar Ray Leonard

I have always adhered to two principles. The first one is to train hard and get in the best possible physical condition. The second is to forget all about the other fellow until you face him in the ring and the bell sounds for the fight.
Rocky Marciano

I’m so fast that last night I turned off the light switch in my hotel room and was in bed before the room was dark.
Muhammad Ali

I will fight like a lion to retain my title.
Rafael Márquez

I hospitalized a rock, killed a brick…I’m so bad I make medicine sick!”
Muhammad Ali

Bruce Lee was an artist and, like him, I try to go beyond the fundamentals of my sport. I want the public to see a knockout in the making.”
Sugar Ray Leonard

Rhythm is everything in boxing. Every move you make starts with your heart, and that’s in rhythm or you’re in trouble.”
Sugar Ray Robinson

The fight is won or lost far away from witnesses, behind the lines, in the gym and out there on the road, long before I dance under those lights.
Muhammad Ali

In order to be at the top and maintain your focus you have to have something that motivates you. For me, it was what I perceived as a lack of respect from the boxing world as well as the media, which made me want to work so hard and be great.
Marvin Hagler

Getting hit motivates me. It makes me punish the guy more. A fighter takes a punch, hits back with three punches.
Roberto Duran

Boxing is the toughest and loneliest sport in the world.
Frank Bruno

In boxing you create a strategy to beat each new opponent, it’s just like chess.
Lennox Lewis

I hated every minute of training, but I said, ‘Don’t quit. Suffer now and live the rest of your life as a champion’.
Muhammad Ali

It’s less about the physical training, in the end, than it is about the mental preparation: boxing is a chess game. You have to be skilled enough and have trained hard enough to know how many different ways you can counterattack in any situation, at any moment.
Jimmy Smits

That’s the most beautiful thing that I like about boxing: you can take a punch. The biggest thing about taking a punch is your ego reacts and there’s no better spiritual lesson than trying to not pay attention to your ego’s reaction.
David O Russell

To become a champion, fight one more round.
James Corbett

A champion is someone who gets up when he can’t.
Jack Dempsey

The man who has no imagination has no wings.
Muhammad Ali

To be a champ you have to believe in yourself when no one else will.
Sugar Ray Robinson

My goal is not getting hit and to knock the other guy out. Some people might complain because they want to see boxers beat up on each other, but you cannot last long in professional boxing if you take a lot of punches.
Wladimir Klitschko

With experience in boxing, you learn how to be a scientific boxer and how to fight easy.
Manny Pacquiao

All of the sports have a safety net, but boxing is the only sport that has none. So when the fighter is through, he is through. While he was fighting his management was very excited for him, but now that he is done, that management team is moving on.
Gerry Cooney

Everything I have in this world, I owe to the sport of boxing, and I won’t ever forget that.
Oscar De La Hoya

In boxing, I had a lot of fear. Fear was good. But, for the first time, in the bout with Muhammad Ali, I didn’t have any fear. I thought, ‘This is easy. This is what I’ve been waiting for’. No fear at all. No nervousness. And I lost.
George Foreman

I was not athletically inclined. I was very quiet, introverted, non-confrontational. My three older brothers were athletes – basketball, football – but I was kind of a momma’s boy. Then one day, my brother Roger encouraged me to go to the boxing gym with him. I tried the gloves on, and it just felt so natural.
Sugar Ray Leonard

Boxing is the ultimate challenge. There’s nothing that can compare to testing yourself the way you do every time you step in the ring.
Sugar Ray Leonard

It’s less about the physical training, in the end, than it is about the mental preparation: boxing is a chess game. You have to be skilled enough and have trained hard enough to know how many different ways you can counterattack in any situation, at any moment.
Jimmy Smits

In boxing you create a strategy to beat each new opponent, it’s just like chess.
Lennox Lewis

Aside from a handful of guys boxing is missing the good trainers, that’s why our sport is so in the air now because we don’t have people who have the capability to not only train fighters but also train and create decent respectable citizens of the world.
Alexis Arguello

I beat Larry Holmes and George Foreman. I whupped Mike Tyson twice. I had my ear chewed off and spat on the ground in front of me. I’ve seen everything it is possible to see in boxing. I know this business better than anyone. So I live and die by my own decisions.
Evander Holyfield

There’s not as much oxygen in that hot gym and I think it’s great for conditioning. I believe in a lot of boxing. You can train and work on the speed bag and heavy bag, but when you get in the ring with another fighter, it’s a different story. Punches are coming at you, there’s physical contact, muscle against muscle.
Emanuel Steward

Champions aren’t made in gyms. Champions are made from something they have deep inside them-a desire, a dream, a vision. They have to have the skill, and the will. But the will must be stronger than the skill.
Muhammad Ali

Please feel free to add any other quotes you think we should add to this list in the comment section below.