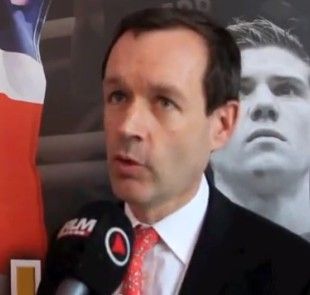 Smith told Kugan Cassius, ‘I’m excited about Luke Campbell, I’ve known Luke a longtime and I remember when he was voted the young amateur of the year, by our boxing writers club.

“I think he’s done exceptionally well, double ABA champion, won the Europeans, silver in the worlds and then last year at the Olympics.

“Johnny Nelson and I were interviewed just before hand and I was asked; If theirs one person who I thought would strike gold out of the boxing team, who would it be? And I stuck my neck on the line and I said Luke Campbell.

“Because I just thought of Luke’s dedication, his style, his speed his skill and his warriors heart too would get him through and I was so please to see him win.

“He’s a lovely kid, he’s got a great fan base up in Hull and I’m very very excited about the fact that he has decided to turn professional and obviously he’ll be on Sky, so it’s a super day.” added Smith.

Watch the full interview with Smith on the video above, where he also gives his views on the up coming clash between super-middleweight champions, when Britain’s IBF world champion Carl Froch takes on his Danish rival WBA champion Mikkel Kessler in a big unification rematch at the O2 Arena in London on May 25.