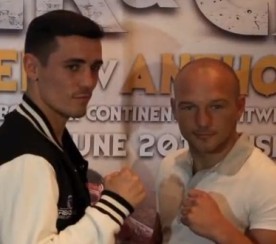 The fight takes place at Bolton Arena on June 29th and is promoted by Matchroom.

Both of these top British contenders know a win could propel them onto big things, with talk of a possible shot at WBO lightweight champion Ricky Burns for the winner.

Rees and Crolla both spoke to Kugan Cassius for iFilmLondon about the fight, both video interviews below.

Gavin Rees is hoping victory over Anthony Crolla will propel him to another tilt at the world title, with Ricky Burns on his mind.

The Welsh lightweight returns to the ring for the first time since his defeat to WBC champion Adrien Broner earlier this year, when he was stopped in five rounds.

Anthony Crolla admits he is in for the biggest test of his career against former world champion Gavin Rees. Crolla is coming off a draw against Derry Mathews and knows that a win over Rees will put him in a great position.