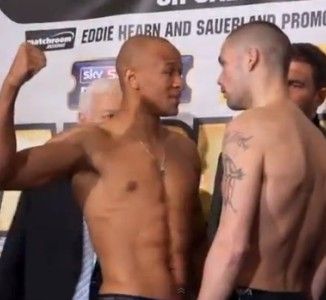 Tony Bellew and his opponent Isaac Chilemba weighed-in ahead of their rematch at the O2 Arena, where the fight takes place tonight for Bellew’s WBC Silver light heavyweight title and the final eliminator for the WBC world title.

Both Bellew and Chilemba comfortably made the 12st 7lb limit.

Bellew and his Malawi rival first met in March at Liverpool’s ECHO Arena and after 12 uninspiring rounds the fight was scored a draw. But Bellew will be looking to leave no room for debate this time around, as the prize for the winner of this return is still a shot at the winner of WBC champion Chad Dawson and Adonis Stevenson on June 8 in Canada.

Bellew admits Chilemba’s slippery style left him feeling annoyed last time they met and says he couldn’t believe his opponent employed such negative tactics in a fight of such high stakes. But Chilemba says that last time they fought just nine weeks ago, he was ill with the flu and couldn’t perform to his best, something that he intends to do this time around and has promised to knock-out Bellew! But that is just fine by the Bomber! “It takes two to make a fight and I’ll just get on with it, It is what it is.” said Bellew.

“It might not be anticipated by many people after the first fight but it’s a fight at the end of the day and I’ll go in there and put the wrongs right. He might not have been very well but it’s very rare that someone with the flu gets stronger as the fight goes on.

“He got stronger as the fight went on. The only thing I can think is that the flu took away his balls because he fought as if he didn’t have any. “I’m hoping now that the flu’s disappeared they’ve appeared again and he wants to have a go.

“A leopard doesn’t change his spots and he’ll revert to type when the going gets tough. The fact that he’s talking about knocking me out is music to my ears,” added Bellew.

“But the fact of the matter is when he gets touched for the first time like he did last time, he’s going to say ‘I’m going to box here because I don’t want to get knocked out.’ Saturday can’t come soon enough. I’d love to knock him out but it takes two fighters to come together and that’s tough to do.”