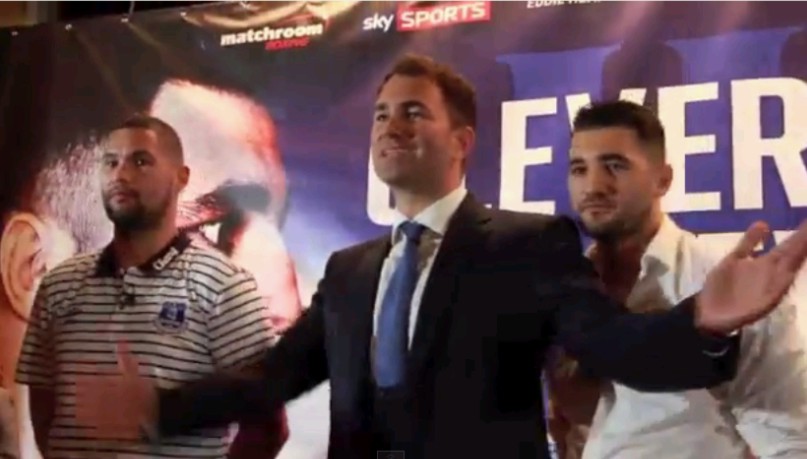 Three years ago, Cleverly defeated Bellew by a tight majority decision as he defended is WBO World Light Heavyweight crown and finally the rematch is on. On November 22 the pair will go head to head for the second time but at Cruiserweight back at the Echo Arena in Bellew’s home town of Liverpool.

Tickets for the show are currently on sale to Matchroom Fight Pass members and go on general sale at midday today (October 1) – tickets will be available from the Echo Arena website www.echoarena.com and on 0844 8000 400 – with the Echo Arena selling tickets priced in the £40-£150 bracket. The £300 VIP tickets are available exclusively from Matchroom Boxing at www.matchroomboxing.com and on 01277 359900.

Nathan Cleverly said: “Many people have asked me why I am going back to Liverpool to fight Tony Bellew again and the answer is simple – I don’t like him. He talks too much and although I’ve beaten him before in front of his home fans, I am going to KO him this time around. He will not hear the final bell, I can guarantee you that. I will deal with him all over gain and become a two-weight World champion.”

Tony Bellew said: “I have been waiting for this fight for three years and now it is here revenge is the only thing on my mind. I have seen his horrible face in my head many nights since the fight but I have not have the chance to make it right. This is a chapter in my life that I need to close and I will do that by ending Nathan Cleverly’s career on November 22. I am in the sport to be successful and win titles but this fight means more to me than any of that – this is personal, and he will not want to enter a boxing ring after I have finished with him. It’s my first headlining show on Sky Sports Box Office and that just underlines how big this fight is and I am going to make sure my performance is a destructive and memorable one.”

Sky Sports viewers can follow the build-up to the big fight with unprecedented access to both boxers and their training camps on documentary series ‘Behind the Ropes’. ‘Gloves are off’ will see Cleverly and Bellew confront each other face-to-face ahead of November 22 and Sky Sports’ weekly show ‘Ringside’ will also feature news and interviews with boxers and experts.