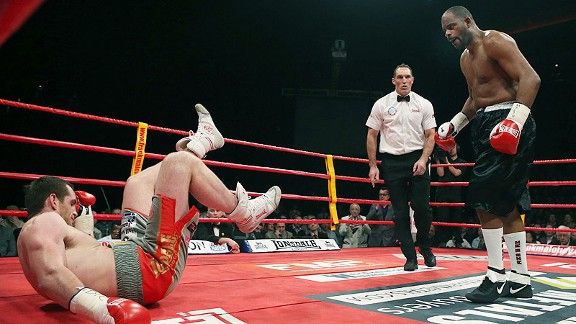 David Price is preparing for his rematch with conqueror Tony Thompson in Canada and will have former undisputed heavyweight king Lennox Lewis in his camp to offer some words of advice and to give the current British heavyweight champion a few words of his advice and guidence has he looks to get his promising career back on track on July 6.

Price suffered a surprise knockout defeat to Thompson in February, but has chosen to get straight back in with the American immediately with the sole intent on avenging the loss, in the way Lewis himself did after early career defeats to Oliver McCall and Hasim Rahman.

Lewis contacted Price to offer his help after the shock first round KO loss to Thompson and the former champion agreed to pass on training tips to big Pricey.

“Lennox contacted me in the aftermath of my defeat in February to Tony Thompson, just to give me a few words of advice.” Price told Ringside Toe 2 Toe podcast.

“He mentioned that he would like to do something with me as far as training is concerned. We kept in touch and he’s offered to help me out for this next fight and beyond really.

“Me and (trainer) Franny (Smith) are going to go over to Canada to do some work with him and Courtney Shand, who used to be his conditioning trainer, and I’ve got a massive amount to gain by going over.”

“Lennox won’t be in the corner or anything. He’s going to be advising me and teaching me, and things like that.

“It’s a massive opportunity. Just having him in and around the gym is going to inspire me. Just his presence really.

“I imagine he has got a lot to offer as far as experience is concerned and a few tips here and there.

“It’s something that we were looking to do anyway before I even lost the fight. It was either go and do some work with another trainer, me and Franny as a team, and pick a few different bits up. This opportunity kind of presented itself. It’s ideal.”

But Thompson still has his own ambition of fighting for world titles again after coming up short twice against Wladimir Klitschko in 2008 and 2012 and is coming here confident to prove that the first time he defeated Price was no fluke. Thompson is a proud man and is confident he can upset the Liverpool crowd again at the Echo Arena and repeat what he did in February.

I am very much looking forward to the coming rematch and thought it was a good idea to review their last bout first. I have to say that I noticed something that I believe was partly the reason Tony Thompson performed at the level he did.

The first Thompson versus Price fight was a clear example of how anything can happen in the world of heavyweight boxing. Price appeared to have all the support as well as the height and reach advantage however the older, more experienced fighter used a sharp right to the jaw to sink Price with fifty four seconds to go of the second round. We have always known that in boxing, especially the heavyweight division, any fighter who lands the lucky punch can win, whether they are the favourite or the underdog.

But this fight was a perfect example, showing two fighters using tremendous skill and bravery to give the fans a show, even if it was a very short one. However I wanted to use this article to express something else that I noticed in the Thompson and Price fight.

We have all seen this happen too often in boxing and nothing ever seems to change it. As the boxers enter the ring and the national anthems begin the silence is broken by a wave of booing and jeering from some disrespectful people in the audience. This seems more prevalent in British boxing, and all it does is decrease the reputation of the sport and make people want to turn off the TV, or leave the arena.

I was watching this happen to Thompson in the first fight with Price, as the anthem which is so important to his country and his patriotic attitude was violently booed. I continued watching, seeing him grow angrier in the corner and come out using that anger to put Price on the canvas in round 2. I hope that others in the boxing community share my opinion, however it will continue until people learn to respect the bravery shown by every fighter who climbs through the ropes. But we cannot blame all boxing fans. So many loyal fans are respectful and are willing to enjoy the sport without slandering the foreign fighter’s national anthem.

However, the fans who boo the opposing fighters may in fact spur him on to dominate and win the fight as it clearly did with Thompson. “I know it’s happened and it’s never going to go away” Price was heard to say after the fight, and I can’t help but wonder if his grief could have been avoided if Thompson had not been as fired up after the vilification of his national anthem . Overall we cannot allow this to continue ruining our sport no matter what advantage it may grant the opponent and I hope anyone reading this will feel the same way and stand with me in saying that this cannot go on.

I think that this fight is too close to call as Price is coming to win back the respect he lost after his defeat, and Thompson must attempt to win and secure himself another possible high rank fight. However if Price managed to keep his defence stronger and make use of his longer reach, I think that he may stand a better chance of winning or at the very least, seeing the fight through till the last bell. MY only hope is that we do not have a repeat of the last bout and that Tony Thompson can fight without being disheartened by any more verbal attacks on his national anthem.