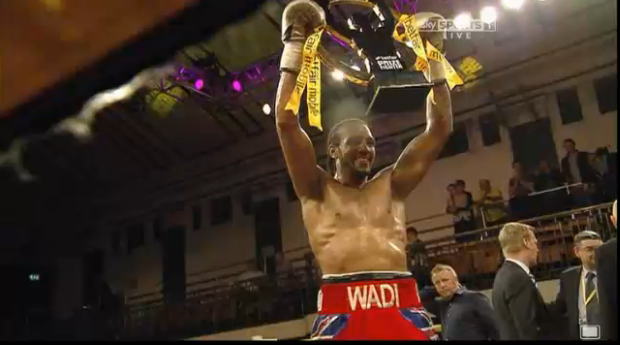 “Watch out everyone I’m coming for you”, were the words from the 27 year old London boy Wadi Camacho who stamina’s through the prizefighter competition, beating Hari Miles with the only knockout of the night with a second round stoppage in the finals. Coming in to the event he was the favourite to win with a 6-1 record, and he didn’t disappoint his large fan base and has high hopes for his future.

Camacho expressed that he trained hard for this competition and that the 7 days a week in the gym paid off. “I’m just warming up” Camacho said after beating Nathan Owens in the semi’s.

“I’m happy, Eddie Hearn said I’m one step away from a British title so here we go baby,” said Camacho after winning the competition.

“I’ve won this tournament here and taken all them out so the next step is up to Eddie. Coming onto Prizefighter wasn’t about the money it was about showing everyone my class what a good boxer I am. I’ve still got that explosive power but I can box as well.” Says Camacho. For his win Camacho takes home £32000 + an extra £2000 for the only knockout of the competition.

Hari Miles’s earlier rounds, especially his fight with Danny McIntosh seemed to take its toll in the final with Camacho. “I had a tough semi-final and that’s taken it out of me, not to take anything away from him, he hit me with the same shot he got me with last time but I just didn’t have much left,” said Miles. Still netting a modest sum of £16000 for his runner up place in the final.

Miles coming in to the fight with 9 (KO 2) 8 (KO 2) is still positive about his future. “I’m definitely not finished yet. I beat the former European champion and I’ve only just been with my new trainer for two weeks.” Miles said.

A special note goes to Nathan Owens who lost his mother to cancer on Wednesday, yet fought a resilient and focus fight getting to the semi finals. He lost on points fighting tonight’s winner Camacho, yet Owens managed to net £8000 in prize money.