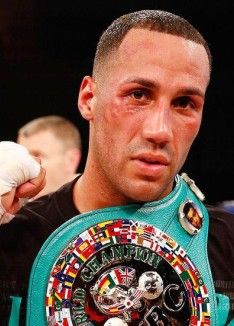 DeGale: ‘Froch is on my Radar

The fight will be broadcast live on Channel 5.

“He’s from Croatia, he’s got a good record,” said DeGale. “He’s not a top 10 fighter in the world, but he’s a good decent solid fighter.” DeGale (right) told the Ringside Toe 2 Toe podcast.

“He’s boxed for a world title and in fact he boxed Carl Froch as an amateur and beat him in the Europeans. He beat him, so he must be decent.

“He’s mixed in good company, so I’m expecting a solid test, but I’m looking to go in there, put a good performance on and showing the people what I’m about.”

The Londoner will be back in the ring just 12 days after knocking-out Sebastien Demers of Canada on his North American debut and DeGale is not hanging around with big fights on the horizon for him, non more so domestically, with rivals George Groves and IBF/WBA world champion Carl Froch both future targets.

Groves inflicted the only loss on DeGales record when he outpointed him in May 2011, talking ‘Chunky’s’ British title and revenge over Groves is something DeGale would relish. But he says that his London rival is not in his thoughts at the moment and it’s the Nottingham ‘Cobra’ that he has his radar set on.

Froch was recently quoted saying that; he would end both Grove’s and DeGales careers if he were to ever face his British counterparts adding he has bigger fish to fry. But DeGale believes he would be the one to end Froch’s illustrious career if they met and says he would take the fight next week.

“George Groves, isnt on my radar at the moment, but Carl Froch definitely is!” said DeGale.

“I can’t see that fight happening and not on my part, on his part. I can’t see him wanting to fight me again, but Carl Froch 100 per cent.

“Look at the fighters that have given him trouble, Ward, Dirrell, (Jermain) Taylor, move, speed, and I think I’ll be all wrong for him.

“I’m here if Carl Froch wants the fight. If the boxing fans want the fight, I’m here. I would have it next week, but I’m not too sure what he wants to do.

“I’ve heard he said if he fought me, he would destroy my career. I think it’s the other way around. If I fought him and beat him, how could he lose to me?”

Still just 18 years-old, Hughie Fury will have his 5th fight in just over two month’s and the busy heavyweight rookie has another two fights already lined up for the next two months. An opponent is not yet named for Saturday, but take a look at Fury if you get the chance, cousin of Tyson he is a big man with bigger potential.

He was a well schooled amateur under the teachings of his dad Peter and had over 50 amateur contests, becoming the only British boxer ever to win a Gold medal at the World Junior championships, he was also a former ABA Junior champion and is well on his way to smashing his way to the top of the domestic scene in his first year as a pro.

The aim of team Fury is for Hughie to become the youngest heavyweight world champion in history. To do so they will have to beat the record set by Mike Tyson, who on November 22, 1986, stopped Trevor Berbick in the 2nd round to claim the WBC heavyweight title at the age of 20 years, 4 months and 22 days. Read more on Hughie Fury here.