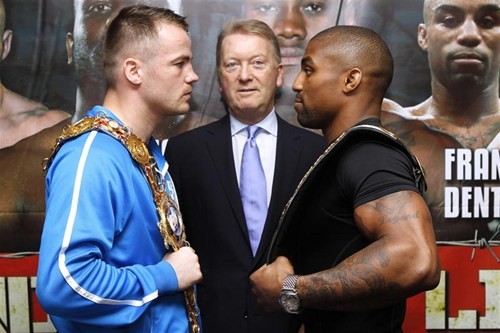 The stand-out Big British fight of the weekend and make no mistake there are plenty of crackers! Is when British champion Frankie Gavin and Commonwealth belt holder Denton Vassell put their titles and unbeaten records on the line tonight (Friday)  in one of the real trade match-ups of the boxing calender, a potentially explosive all-British encounter between the No2 and No3 welterweight’s in the country, Kell Brook leads the way at number No1.

Southpaw Gavin, 27, from Birmingham is the former world amateur champion and one of the most naturally gifted boxers produced in many a year from these shores. He is said to be in lean, mean shape for the biggest fight of his 15-0, 11 KO, career. The Lonsdale belt holders last two fights were against Junior Witter last November to claim the British title and then followed that with a successful defence against Jason Welborn in January.

Vassell, 28, from Manchester is looking to extend his three-year reign as Commonwealth Champion, while ripping the British crown from Gavin’s tight grasp. Vassell claimed the vacant title in April 2010 with a UD points win over Lee Purdy and, has made three successful defences against Bethuel Ushona, Samuel Colomban and last time out he stopped fellow Mancunian Ronnie Heffron in November last year, but he has been inactive for long periods in between.

Both boxers have been out of the ring far too long and for them to return to fight each other is a real treat for British boxing fans and expect both to give everything to secure bigger fights in the future.

This is a match-up which is too close to call and most people who have commented on the fight are split in opinion has to who will be victorious and how? For Gavin the plan will be to use his slick boxing skills and dominate the fight from behind a good one two, while not getting involved in a slug-fest with the strong Vassell.

Vassell’s own boxing ability is not to be under estimated, but Gavin is more superior without doubt, he was the world No1 as an amateur and that says it all. For Vassell his keys to victory will be to cut the ring down and close the range between himself and Gavin. When inside he will have to let the shots go to head and body arms, whatever, look to hurt his man, with the hope of slowing him down, taking away his legs and trying to force a stoppage in the later rounds.

For the betting fans! Gavin on points or Vassell late stoppage – It’s a 50/50 battle on paper and this fight will bring out the best in both of them, but whoever proves to be that little bit better and wants it more will prevail.

Watch the Fight Live and Exclusive on BoxNation