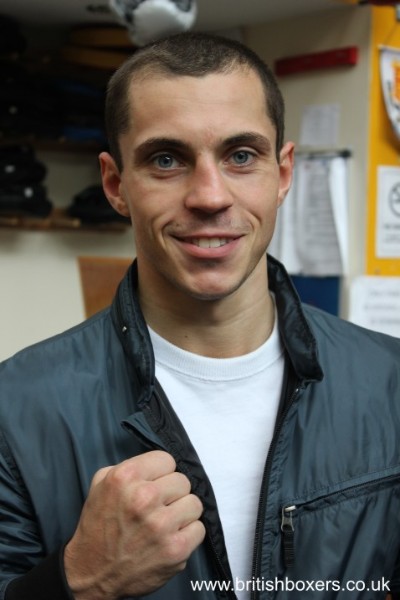 We were over at the Gloves Community Centre in Bolton this afternoon, the gym owned by Amir Khan and where Manchester coach Joe Gallagher trains his squad of quality fighters. Two of those British boxing stars we were there to see were British and WBA Interim world champion Scott Quigg and former British and Commonwealth featherweight champion Stephen Smith who were sparring together in preparation for their upcoming fights.

In the gym going a few rounds with Quigg and Smith was amateur star Joe Costello, 19, a brilliant amateur who is youngest British boxer to win a European Gold Medal. The four times National champion and former world No1 at his weight, was down at Gallagher’s with his dad for the professional sparring and will make his own pro debut on 6th July at Wolverhampton Civic Hall. Expect Big things from this lad when he hits the professional super-featherweight ranks. (We interviewed Joe on video and will bring you this footage soon.)

Stephen Smith takes on a yet to be announced opponent at the Olympia, in Liverpool next Friday(June 28) and Quigg has his first fight under Matchroom Promotions the following day at the Bolton Arena. (Our interview with Stephen will be published to the site soon)

Quigg infact took the call while we were at the gym, about who his opponent was going to be next Saturday and even though he couldn’t quite remember his name when we later spoke, we can confirm now it will be Brazilian William Prado, (21-3-1, 14 KO’s)

The Bury fighter talks to British boxers about being out of the ring for eight months, his last fight against Rendall Munroe and his recent signing over to Matchroom. Also his thoughts on a potential world title fight in September or October, plus the inevitable topic of Belfast rival Carl Frampton.

For this and more, including training footage from inside camp, please watch our video above.

We also spoke to trainer Joe Gallagher and will bring you the video soon.

Below are a selection of photographs from the gym by Imi Majid.