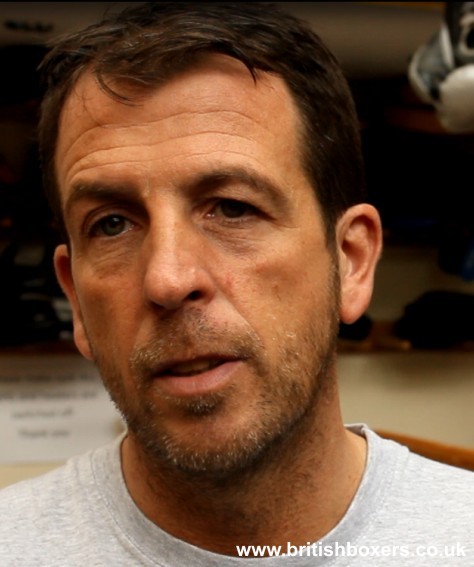 Video: Joe Gallagher on The Smiths, Quigg-Frampton and John Murray

Boxing coach Joe Gallagher talks to BritishBoxers about the upcoming fights and current news regarding the boxers in his stable in Bolton, Greater Manchester.

Super-middleweight Paul Smith takes on Tony Dodson next Saturday (June 29) for the vacant 12st  British title. This will be a rematch of their 2010 battle in which Smith, then British champion, won on points to retain his belt. Three years later the two Liverpool rivals go at it again in what should be an intense clash at the Bolton Arena.. Gallagher previews the fight and talks of Smith’s preparations.

Brother’s of Paul Smith, Stephen and Liam have been left frustrated at their lack of ring action over the last year. Stephen hasn’t fought since June 2010 and Liam since December last year, when he won the Commonwealth title against Steve O’Meara (UD12) Gallagher talks of Stephen and Liam’s fights and future plans.

Gallagher has his world class super-bantamweight star Scott Quigg back at again after a long absence out. The highly regarded Quigg last fought in November 2012, when he successfully defended his interim WBA World super bantamweight title against Leicester’s Rendall Munroe. Quigg is on the verge of a world title shot and after recently signing over with Matchroom Boxing, team Quigg hopes that will be sooner than later.

For now Quigg takes on Brazilian William Prado on the Smith-Dodson bill next week. The one fight that will never go away for Quigg until it finally happens is the anticipated match-up with British rival Carl Frampton. The unbeaten Belfast fighter, who is guided and promoted by former featherweight world champion Barry McGuigan, is the only true domestic rival to Quigg and the fight is one of the biggest that could be made in these lands right now. Gallagher gives his frank views on the potential clash and when he thinks the fight might happen.

Gallagher also talks about his one time student John Murray, the former British and European lightweight champion who recently parted with him after his world title loss to Brandon Rios in December 2011, his last fight. Since then Murray has had time out of the ring, but recently applied for his boxing licence again after initially failing a routine scan. He is now passed fit to continue his career and will be doing that with coach Anthony Farnell on the opposite side of Manchester. Gallagher gives his views on John’s decision and wishes him well for the future.

It never stops in Gallagher’s Gym, which is now based at Amir Khan’s Gloves Community Centre, given the amount of top class professional talent under Joe’s tutor-ledge. There is never a spare minute for Gallagher, fortunately we found a few, has he was just leaving to take Paul Smith for his last sparring session before next weekends fight.

For this and more from Joe Gallagher, please watch the full video above.