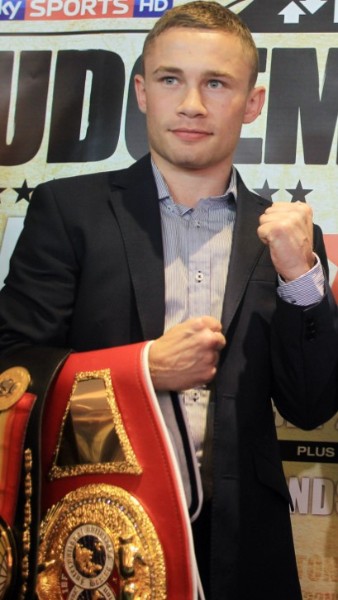 A recurring ear problem, has forced Carl Frampton to pull out of his fight against against Nicaragua’s Everth Briceno which was set to take place at Wembley Arena this Saturday night on the same bill as Dereck Chisora vs Malik Scott.

The unbeaten 26-year-old from Belfast was originally due to fight Fabian Orozco, but the Argentinian suffered an upset defeat and the dangerous Briceno stepped in as his replacement.

However, that bout will not take place after the British Boxing Board of Control deemed Frampton was not fit to box after an old ear injury reoccurred.

Frampton tweeted: “I’m upset to have to announce that I have been ruled out of my fight on Saturday by the BBBoC. An old ear injury mildly reoccurred in a spar.

“A specialist initially informed me I was fit to box. Today the BBBoC ruled me out. I’m so so sorry especially to the people who were coming to support me.

“It’s been an amazing camp and I’m gutted that I won’t be able to showcase my improvements in Wembley.”

Frampton’s trainer Shane McGuigan tweeted: “Unfortunately today Carl Frampton was overruled by the BBBofC that he cannot box this Saturday due to an old ear injury.

“We were passed fit by another source but today the BBBofC ruled us out. We as a team are bitterly disappointed by this decision.