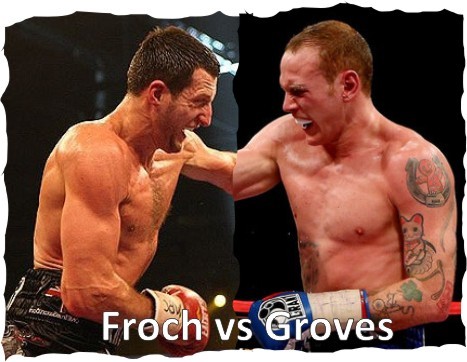 Super-middleweight world champion Carl Froch has been ordered to defend his IBF belt against domestic rival George Groves, after the unbeaten Londoner was made mandatory challenger for the Cobra’s title, and the governing body have demanded he defends their strap against Groves before the middle of October this year.

Froch, 36, is also the WBA champion, he won that belt when he beat Mikkel Kessler in May to avenge one of only two career defeats, the other was to Andre Ward in 2011. Froch (31-2, 22KOs) is currently chasing a rematch with Ward and hasn’t ruled out a third meeting with Kessler, but will now have to turn his thoughts to Groves, if he wants to keep his IBF belt.

The Nottingham champion had previously dismissed Groves and James DeGale as possible opponents, claiming he would ruin the unbeaten duo’s careers if they met in the ring, but he would be in danger of being stripped of the belt he won by crushing Lucian Bute last year, if he doesn’t take the fight with Groves.

Groves, 25, is a stablemate of Froch, they are both under the Matchroom banner, so should make the fight easier to organise, should they decide to make it happen. It is certainly a fight the British boxing public wouldn’t turn their nose up at and would create a massive buzz in the game. Groves (19-0, 15KOs) is ready to move on and challenge for the world title now, a meeting with Froch would show us how good he is, or cement Froch’s legendary status in British boxing.

Should Froch Defend Against Groves Next or Give up the IBF Belt?

Who would Win if They Met?