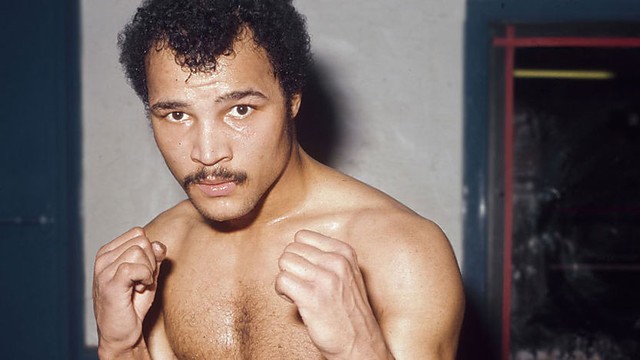 The city of Liverpool has produced many great boxers, but few of them were as talented, as likeable and as telegenic as the great John Conteh, who was world light heavyweight champion from 1974 to 1977.

It is not widely known that Conteh started his career at heavyweight and was, in fact, the first person to defeat fellow Scouse heavyweight, Billy Aird. But his slender, athletic frame was never going to allow him to compete with the best big fellas of his era and so he dropped down to twelve and a half stone.

Conteh must have been a promoter’s dream: he was good looking, quick witted, could box and fight, was a decent puncher with the right hand and was not afraid to subject the rule book to his own interpretation. When he wasn’t boxing at the top London venues, he was a familiar figure to all those who frequented the capital’s night club scene. And if he wasn’t squiring some aspiring model past the velvet ropes, then he could be found on the chat and game shows, or on the pages of the Sunday supplements; telling us mere mortals what we had to do to be as fit as him. He even won the television sports challenge show, Superstars. (That was unusual: boxers had always done badly in the show. There was a theory at the time that high level boxers had dedicated themselves totally to boxing from an early age and had, hence, missed out on kickabouts in the park or the occasional game of tennis.)

Once Conteh had beaten Chris Finnegan for the British and Commonwealth titles, the stage was set for the charismatic Scouser to mount a challenge for world honours. The man he fought for the title – after the retirement of the legendary Bob Foster – was Argentinian Jorge Ahumada. Conteh won a close points decision over the old fifteen round route and was duly proclaimed WBC Champion. The light heavyweight division at this time was absolutely stuffed with talented fighters and a fair number of them were from Argentina: Miguel Cuello also wore the light heavy crown in this era.

Many British writers claimed that Conteh was the best in the world in the division that was – in the old days – referred to as the cruiserweight division. But the man who held the WBA title at the same time, Victor Galíndez – also of Argentina – was a formidable, fear inspiring fighter. On the world stage, there were those who looked at the respective records of both champions and concluded that if they had fought, there was only going to be one winner and that was Galíndez. Had they fought, my money would have been on the Argentinian. However, boxing politics insured that they never got within a thousand miles of one another.

After a routine title defence against Lonnie Bennett, which he won in five rounds, Conteh took a non-title fight against Willie “The Bull” Taylor and at some point in this fight; Conteh broke a bone in his right hand. He was never as effective again and became noticeably reticent about firing the right hand with his previous trademark venom. Nevertheless he was good enough to beat top contenders like Yaqui López in Copenhagen and Len “Stinger” Hutchins, back home in Liverpool. The Hutchins fight was one in which Conteh was particularly liberal in his interpretation of the rules.

Conteh won one more fight as champion – for some reason another non-title ten rounder against Joe Cokes (brother of world welterweight champion, Curtis Cokes), in which he won every round. But waiting in the wings was former Olympic champion, Mate Parlov of the then Yugoslavia. This fight was televised by the BBC and I remember a couple of things about it. The first one of those things is that the boxers’ entry into the ring was subjected to a long delay, while the logo of a well known tobacco company was removed from the trunks of one of the boxers. The second thing I remember is, that in my humble opinion, Parlov did not deliver his jabs with the knuckle part of the glove. But as the fight took place in Belgrade, the visiting boxer was hardly going to be the beneficiary of any bias there might have been in the judging of Parlov’s punching technique. I remember thinking that Conteh was robbed, but I was nineteen years old and did not fully understand the ways of the world.

Conteh never again wore the world crown. A fearsome battler by the name of Matt Franklin was storming his way out of the gyms in Philadelphia. At some point he became a Muslim and took the name Matthew Saad Muhammad, but whatever name he went under, he was a hell of a fighter. Conteh tried to regain the world title in two tilts at Saad Muhammad. The first of these was a unanimous, but close, points defeat over 15 rounds in Atlantic City in August 1979. The second fight, however, was much less competitive with Conteh being stopped in four rounds; again in Atlantic City.

Sometime between these two fights, Conteh appeared to lose interest in boxing. This was evident from something he said after the second fight. Conteh had been knocked down and explained later on that he found himself thinking (something along the lines of) “What am I doing in here with this maniac, when I could be enjoying myself in Tramp?” Given the choice, I know which one I would take.