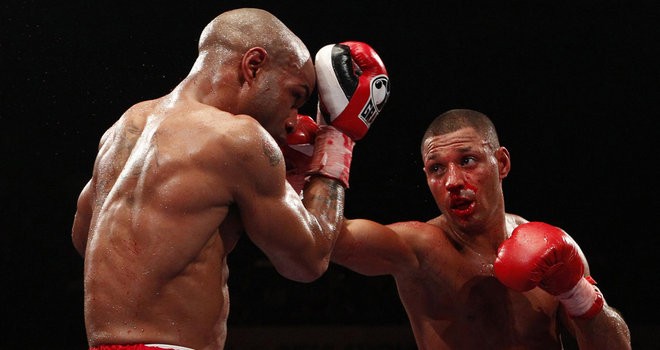 Brook (right) was pushed hard first time around by Jones

Kell comfortably won the early rounds using his jab and picking off Jones regularly. However Jones gradually wore himself into the fight and began to find success inside, breaking his nose and looking for the stoppage late on. Kell managed to survive the last 2 rounds to win the fight, however questions were raised over his stamina – his trainer Dominic Ingle has since taken measures to improve his fighter’s diet and core stamina.

Kell has only fought once since then, a 3rd round stoppage over Hector Saldivia in October which earned him the No 1 Mandatory position for the IBF Welterwright title. He was scheduled to face Devon Alexander in for the title early 2013 but the bout was cancelled on 3 occasions due to injuries from both camps.

Carson was originally scheduled to face Lee Purdy but after “Lights Out” withdrew, Dean Byrne came in as a late replacement and battled to a surprise draw. Whilst this was a disappointing result for Jones who on paper should have comfortably dealt with the untested Irishman, he scored a 3rd round KO over Travis Hartman to get back to winning ways.

The fight is a must win for either fighter if they want to challenge for world honours, Kell maintains his No 1 Mandatory position for the IBF title going into the fight and knows that a defeat will almost certainly see him lose this.

Carson will be keen to climb back up the rankings and prove that he has what it takes to beat Kell. Despite Kell’s recent inactivity I expect him to win the contest comfortably, he will have learnt his lesson from their last fight and leave no stone unturned.

Carson will test Kell and certainly will be looking to continue where he left off at the end of the first encounter, but I expect Kell to use his speed and quick jab to hold off Jones and no doubt he will be keen to put on a performance knowing that a big fight in September beckons.

Kell Brook to win via UD