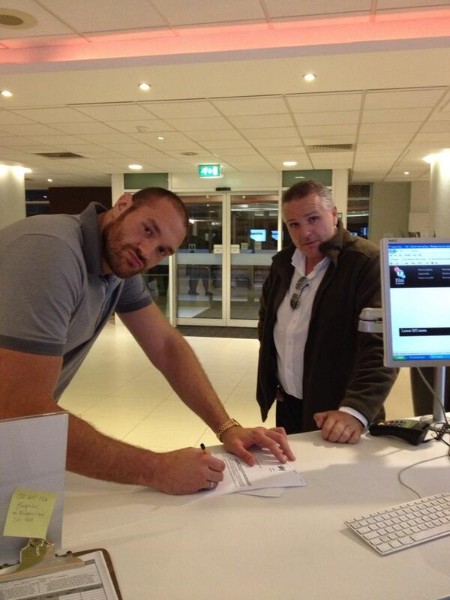 Tyson Fury arrived in London and signed the contract to fight David Haye today ahead of Thursday’s press conference to officially announce the fight to the worlds media.

Fury confirmed he will fight British heavyweight rival Haye in Manchester on 28 September at the Manchester Arena.

This week both camps released a statement to finally reveal the fight all of boxing wants and the Biggest British fight for many a year, it read; “David Haye and Tyson Fury, both world-ranked, charismatic and dangerous, have agreed to a highly-anticipated domestic showdown on Saturday, 28 September at the Manchester Arena.

“It marks not only the biggest heavyweight encounter of 2013, but also the biggest fight staged in Britain for many years.”

The showdown brings together two of the most controversial characters in boxing. Officially, there’ll be no title at stake but the winner will be crowned the best heavyweight in Britain. Haye hasn’t fought since beating Dereck Chisora 14 months ago and is looking to steer his way back into world title contention. Fury is a former national amateur champion who has also beaten Chisora and is unbeaten in 21 fights as a pro. The build-up has the potential to be every bit as explosive as the fight itself.”

Former WBA heavyweight champion Haye, 32, has not fought since a fifth-round stoppage victory against Dereck Chisora in July 2012.

Fury, 25, was last in action in April when he stopped American Steve Cunningham in the seventh round after getting off the floor to do so in New York.

Haye, who was also the undisputed cruiserweight champion, withdrew from a June date with Manuel Charr because of a hand injury sustained in training.

A defeat by Wladimir Klitschko in October 2011 led to him announcing his retirement, but he reversed his decision in order to meet Chisora in 2012.

Prior to Fury signing his contract, overlooked by trainer and uncle Peter, Haye had goaded the Manchester-born fighter on Twitter, saying: “Lets hope he finally agrees and doesn’t keep delaying.

Haye then posted a short video of him signing his side of the contract, Fury has now followed, it is ON!