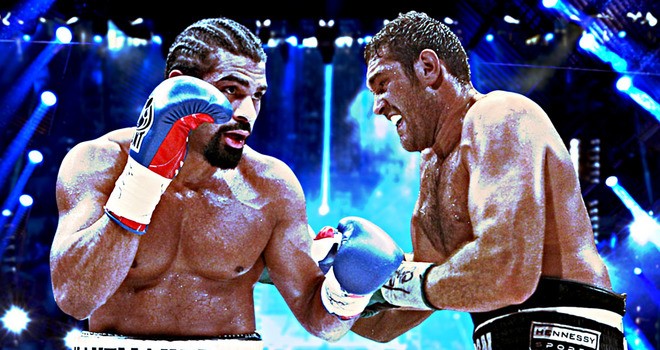 The grudge match-up between  Haye and Fury will headline an exciting night of boxing at Manchester Arena on Saturday September 28.

The showdown will decide a rivalry that has been building between two of the world’s top ranked heavyweight fighters since Haye’s return to boxing last year and will determine the number one big man in Britain and the winner will be in a great position to challenge for a version the world heavyweight title.

Haye, 32, came out of retirement to defeat Dereck Chisora convincingly last July, after quiting the game after his world title defeat to Wladimir Klitschko. The Hayemaker has been defeated just twice in 28 fights, and has 24 wins by KO. His most notable victory came in 2009, defeating seven-foot tall Russian Nikolai Valuev to claim the WBA World Heavyweight title.

Fury, 25, meanwhile, became the first boxer to win the British, Irish and Commonwealth heavyweight titles when he dramatically defeated Martin Rogan last year. Previously in 2011, he outpointed Dereck Chisora to claim the the British and Commonwealth straps. After 21 fights he remains unbeaten, and returns to the UK following his win against America’s Steve Cunningham at Madison Square Garden in April.

Former WBA champion, Haye, insists he is still top of the pile when it comes to British heavyweights: “I’m still the best fighter around and have nothing to prove, but Tyson likes to talk a lot and this is my chance to silence him. I’m in great shape and ready to go. It’s time to put an end to rumours that there’s anyone in Britain that can beat me.”

However, Fury believes his London opponent is past his best: “This event is about me, a world-class boxing star, taking on Haye, a has-been,” he said.

“Haye has been running scared of me ever since the possibility of the match came about, and now I’ve earned my shot. I’m going to prove that I’m a future world champion by beating a former one. David Haye is the past.”

Sky Sports boxing executive producer and presenter of Ringside Adam Smith said: “This clash between David Haye and Tyson Fury certainly gets the adrenaline flowing. We’ve got two strong characters and an air of unpredictability which means the anticipation for the event will be huge.

“I’m hoping for a thrilling finale. Can Haye’s frightening power crush Fury’s unbeaten record, or can the giant youngster take a massive leap to becoming Britain’s next world heavyweight champion?”