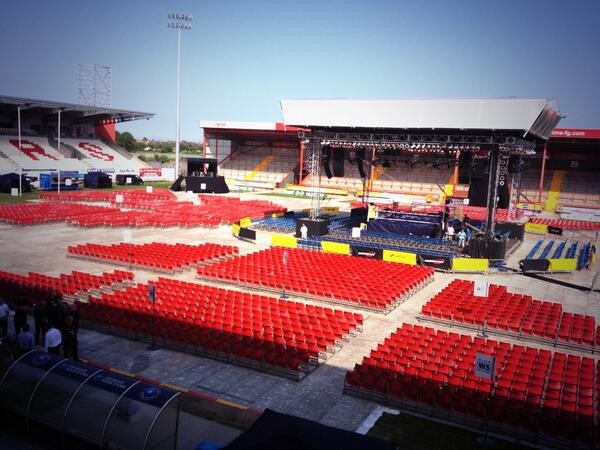 The ‘Homecoming’ Boxing Results from Hull

The ‘Homecoming’ Boxing show at the MS3 Craven Park in Hull kicked off early in the evening on a hot bright sunny afternoon in the North of England, and a selection of quality boxing matches opened a terrific outdoor fight show, that got better has the night drew in.

Dewsbury journeyman fighter Youssef Al Hamidi doesn’t get many wins in his career, but can sometimes pull off the odd upset, if his opponent isn’t on the ball. He didn’t pull off the win against local Hull boxer Joel Haigh , but managed to snatch a draw over the 7-0 prospect with a score 38-38 in this 4 round lightweight contest. Haigh kept his unbeaten record after starting the fight well, in the opening contest of the evening. The local boy looked to have picked up the first two sessions, but then slowed to let Hamidi back into the fight.

John Ryder remained unbeaten and on course to take on British and Commonwealth champion Billy Joe Saunders on September 21, with a nice 2nd KO over Spain’s Guzman Castillo in a schedule 6 rounder. Ryder takes his pro career record to 15-0, 8 KOs.

Driffield’s Curtis Woodhouse has run around a few centre circles in his days has a Premiership footballer and tonight was no exception, has he gave Joe Elfidh, not exactly the run around, but a good going over, has he got stuck into the Rochester man from the opening bell and gave a powerful display before administering the stopping in the 3rd round. read more on the fight here

Liverpool’s Rocky Fielding outpointed late stand in Darren McKenna over four rounds 40-36. Rocky started the fight fast and looked liked he would make short work of it as he put early pressure on the Sunbury man.

Rocky, 25, put his combinations together well and McKenna was looking troubled. Coming out forthe second round Rocky decided to then get behind his jab and slow the fight down, as if he wanted to get the four rounds under his belt, to keep building his experience has he works towards a British title shot. – The current British title holder is fellow Scouser Paul Smith and there is talk of an all Merseyside clash next year between the pair. Fielding improves his record to 15-0, 8 KOs.

Collins, with good backing in the stadium, boxed well to take the first round, but then allowed Payne to get back into it a bit has he grew in confidence. But Collin’s then upped his game and started to sit on his shots and began to trouble Payne. Collin’s got himself back in control.

Payne found himself on the canvas at the beginning of round four, with a sharp combination, he then finished the job after the referee jumped in to stop the fight.

Ogogo began his fight against Boulden confident and was forcing his Shepperton opponent back, but to his credit Boulden responded well, bit on the gum shield and fought back. read more

Tough Romanian Simion didn’t come to Hull to give up his title easily and gave the Welshman the toughest fight of his professional career. Selby picked his punches well for the first half of the fight and built up a slender lead, but the champion began to show why he is unbeaten and rated so highly in world boxing and gave Selby plenty to think about. read more

Derry Mathews won the vacant Commonwealth lightweight title after coming from behind to dramatically stop a very good Tommy Coyle in the 10th round. read more

Kell Brook looked and performed like a different boxer to the one who struggled to contain Carson Jones in July last year. This time around in Hull, Brook dominated Jones, dropped him in the second, before stopping the tough American at 1:07 of the 8th round. read more

Lightweight Olympic gold medal winner Luke Campbell MBE blasted out his debut opponent Andy Harris in the first round, without taking a punch back. read more