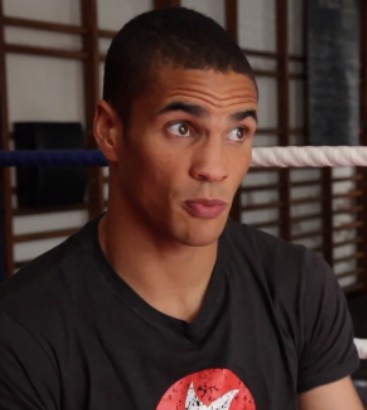 Anthony Ogogo from Lowestoft scored his third professional win, with a 5th stoppage win over Gary Boulden on the ‘Homecoming’ boxing event in Hull on Saturday night.

Ogogo began his fight against Boulden confident and was forcing his Shepperton opponent back, but to his credit Boulden responded well, bit on the gum shield and fought back.

Boulden landed a right hook towards the end of the second round which troubled Ogogo a little and woke him up, if he was ready to take an inspired Boulden lightly, he had just had a warning. Boulden had previously held the Southern Area middleweight title and pushed reigning British and Commonwealth middleweight champion Billy Joe Saunders ten rounds in 2011 so was a decent test for Ogogo this early in his career.

It took Ogogo, 24, a couple of rounds to get his distance and rhythm but when he did he shown in glimpses just why he is rated so highly, a big right to the body hurt Boulden and Ogogo took control of proceedings again, his punches were sharp and Boulden was now feeling the effects.

A big right hand in the fourth dropped Boulden for a count, he got up and continued, he hung onto Ogogo to gather his senses, but he was caught again and looking there for the taking, but survived the round. Another combination of accurate shots at the start of the 5th, saw the referee jump in and stop the fight. Ogogo looks to be going places.