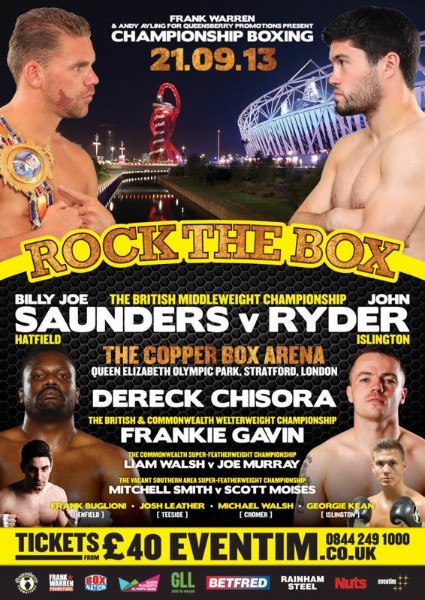 Former World Title challenger Dereck Chisora, who recently enjoyed the best win of his career against Malik Scott, made headlines on his short break to Ibiza last month when the Finchley heavyweight came face to face with long-time rival and World Heavyweight Champion, Wladimir Klitschko.

Chisora opened up about the meeting and reiterated his desire to face the younger Klitschko brother in the ring in the next year. Chisora, who is mandatory challenger for the European Heavyweight Title, is part of a bumper line-up at the Copper Box Arena’s debut boxing event on the 21st September, headlined by Billy Joe Saunders’ British title defence against John Ryder.

Chisora, who stopped the previously unbeaten Scott in the sixth round, said: “I want to get hold of that European Title, because that will set up a shot against Wladimir that I’ve been waiting on for 2 years.”

“I told him when I bumped into him in Ibiza that we had unfinished business and that I was coming for his World title belts. He seemed nervous about my presence but told me that he’s ready to make it happen”

The controversial star continued: “It’s as bigger fight as any out there for him, with all that happened in Germany when I faced the elder brother. If I get hold of the European Title then it makes me the natural opponent for him. He’s much better facing me, a live opponent that will get the whole world’s attention, rather than getting another body that won’t come to win.”

All onlookers have agreed that the former British and Commonwealth Champion has found a new lease of life with his new diet and more focused training regime. An announcement will be made shortly regarding Chisora’s Copper Box opponent, but his opposite man is likely to have his work cut out against ‘Del-Boy’ who still has burning ambitions to capture the richest prize in sport.

Chisora appears alongside a terrific undercard for The Queen Elizabeth Olympic Park event, ‘Rock The Box’ which is headlined by the highly anticipated Saunders v Ryder showdown. British Welterweight Champion Frankie Gavin, makes the first defence of both the British and Commonwealth titles as he attempts to secure the Lonsdale belt outright and Merseyside’s exciting ‘Baby-Faced Assassin, British and Commonwealth Super-Flyweight Champion Paul Butler faces Chiles Miguel Gonzalez for the WBO Intercontinental title.

In addition to all this, a cracking Commonwealth Super-Featherweight Title showdown takes place between Liam Walsh and Joe Murray, whilst the KO specialist elder Walsh brother Michael also appears on the bill looking to extend his 100% perfect resume.

The hotly touted Mitchell Smith also has his first tilt at a title when he faces Scott Moises for the Southern Area Super- Featherweight Title, whilst Super Middleweight sensation Frank Buglioni will be bringing his army of over 600 fans to the venue.