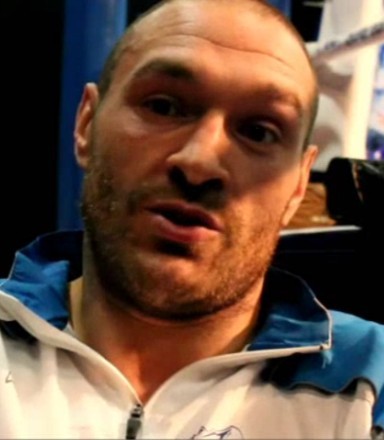 Tyson Fury has been training hard deep in the Belgium countryside in the quiet town of Essen just on the Dutch boarder, the heavyweight giant is preparing for the biggest fight of his professional career against countryman and former heavyweight world champion David Haye.

Fury, 25, has been locked away from all the distractions that have in the past threatened to derail his promising career, he is living the life of a world class athlete now and is promising to put an end to the Hayemakers career when they clash on September 28th in Manchester.

6’9″ Mancunian Fury, will have home advantage in this highly anticipated matchup, that will almost certainly see the victor in line to face Wladimir or Vitali Kiltschko for their world title belts next year.

“I’ve been away from my wife and children for 8 weeks, I’m training hard two and three times a day, it is hard work but necessary and I will be taking it all out on David Hayes face come fight night.” Fury told www.britishboxers.co.uk

“I’m one of them fighters that needs to be away training, when I’m at home I can’t behave myself to be honest with you, I’m a bit of a jack the lad, il do anything go anywhere, up for anything, up for a laugh, if there’s anything going on I’m usually there, so I can’t focus at home so it takes these camps for me to do it correctly, drink right eat right sleep right. Otherwise I’d probably be out down the local pub with everybody having a good time singing a few songs and drinking a few beers as you do.

“Big fights have to have big sacrifices, but after the fight I’m sure il have a good drink when I’ve beaten David Haye.” Fury added.

Fury certainly has no love lost for Haye, the  former cruiserweight and heavyweight world champion and has been predicting a knockout over his British rival, but says he wouldn’t be surprised if the Londoner fakes an injury or is pulled out of the fight by his corner, robbing him of a clean win.

Even though Haye is considered the favourite, Fury certainly has the confidence and believes he can win. To check the betting odds on Fury to win visit Match Betting. It may be worth taking the gamble because if he is victorious it would certainly pay off.

Spending time with Fury in his Belgium training camp, it is clear to see and hear that the 6’9″ Mancunian is genuinely vexed towards Haye. He snarls when he says he heard that his London rival would refuse to give fans autographs unless they could do twenty press ups in front of him. Fury, getting more angry says someone told him that one fan who was with his girlfriend asked Haye for his autograph, but was told if he wanted it, he would want a kiss off his girlfriend first. These and other things are helping build a picture of Haye in Fury’s mind and he is determined to put an end to his rivals career when they meet at this end of this month.

“I don’t know anybody who likes him, no one likes him to be honest, Journalists anybody who knows him or does interviews with him knows he’s an arrogant prick and that he isn’t a nice guy.” Fury added.

“I might actually speak to his wife to see if she has got anything good to say about him rather than anybody else, because David Haye is not a nice person.

“When I fight most of the people want to see me lose, because I’m cocky, arrogant, undefeated, good looking, sexy, six foot nine, everything I’ve got it all and they just want that person to just get killed in the ring, but it ain’t happening David Haye is getting smashed.

“Even if it wasn’t me fighting David Haye I’d want them to win, even when he fought that big Ukrainian t@@t Wladimir Kiltschko. Everybody wanted Wladimir to win deep down because he was a nice fella, wore a suit, very nicely spoken, while David Haye was thuggish wasn’t he, came in giving his gangster bullshit, but you can see what he is a mile away.

“But when it comes to someone like me who he has never met before, who has out talked him from every angle, out thought him, out spoke him, everything that he is usually doing, it’s put him on the back foot and I think his bubbles been burst even before he’s had a fight.

“He is shitting himself, when I look at him I see a little pussy who knows he hasn’t got a chance in hell. He’s going to come forward swinging a few shots and when I start landing the jab on him and start catching him flush in the face his arse is going to go and start flapping and when I start landing the jab and hitting him with some hard shots you will see his confidence start draining like a bottle of coke turned upside down with no lid on it.”