Klitschko: “I hope that Tyson Fury is going to walk his big talk.” 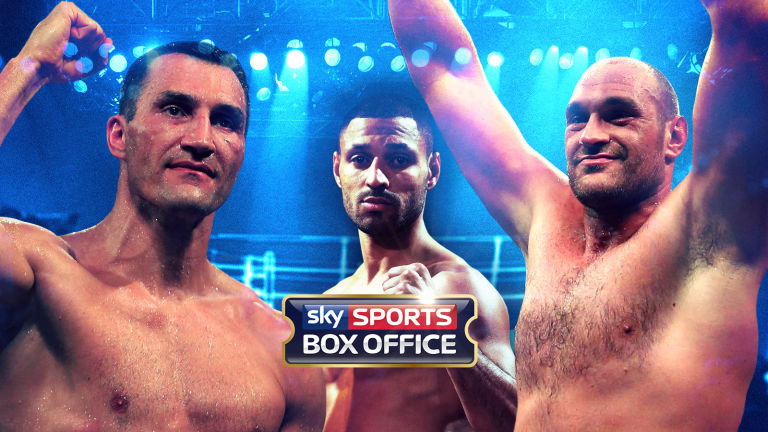 Tyson Fury’s world heavyweight title challenge against champion Wladimir Klitschko on Saturday October 24, will be shown live in the UK on Sky Sports Box Office PPV. Also on the same night as part of the package, Sky will also broadcast Sheffield’s Kell Brook in his 3rd world title defence against the rugged Argentine Diego Chaves.

There is no doubt about it Sky Sports do produce a great show and with over six hours of live fight action being promised, beginning at Sheffield’s Motorpoint Arena for Brook and then over to the ESPRIT arena in Dusseldorf Germany for Fury’s big night, it seems it should be a night worth forking out the extra for.

Manchester’s unbeaten Fury, finally gets the chance he has been fighting and calling for against the long standing champion, Ukranian Klitschko, who together with his brother Vitali has ruled the heavyweight division since his first world title victory against Chris Byrd in 2000.

The impressive Wladimir holds the WBA, WBO, IBF, and IBO belts and has reigned 11 years unbeaten at the top and it appears he is training for the Fury threat like never before, knowing his destiny is on the line and he is determined to be prepared for his British challenger.

Klitschko, as much as he respects the fighting talents of Fury, he is dismayed at his attitude in the build up to the fight and is said to be shocked at the language Fury has used in his person and online and believes it is his duty to keep the title and will be ready for Fury come fight night.

“It’s fantastic that Sky is our TV partner for this great fight.” said Klitschko about the announcement of TV rights.

“I promise everyone an exciting evening and I hope that Tyson Fury is also going to walk his big talk.

“I will be ready when October 24 arrives, hopefully Tyson will be too”. added Klitschko. – Fury has really rattled the champion and so far he hasn’t taken the challengers bait, despite Fury’s close to the bone rants and straight talking provocation. Fury is super confident and believes that the world wants a new heavyweight champion and he is the man to do it!

“This is my destiny.” insisted Fury.

“I vow to the British public I will end the Klitschko era and become the new heavyweight champion of the world. All of Europe wants to see me beat him. For far too long Wladimir and his brother have spoiled boxing with their boring jab-and-grab style.