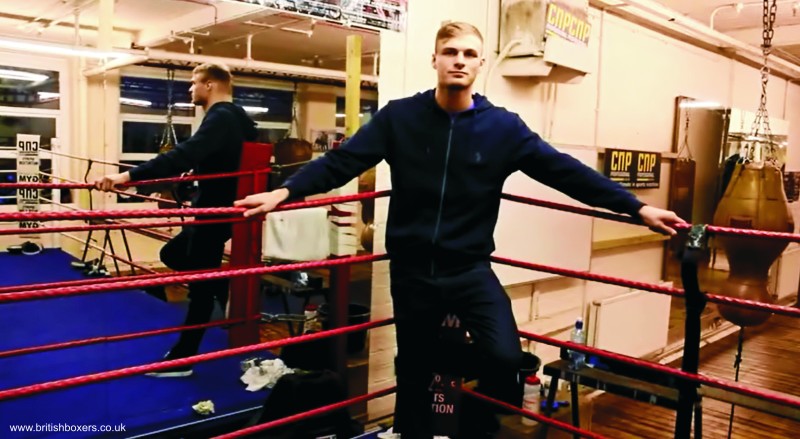 Arnfield and Khan set to light up Blackpool

Fight fans get the chance to watch a top boxing show live or free on the Internet (VIPBOXING.TV) next month when VIP Promotions come to Blackpool.

The show, at the Winter Gardens on November 15, is topped by local man Jack Arnfield looking to negotiate the challenge of dangerous veteran Max Maxwell.  While a stacked undercard will feature the third career bout of Amir Khan’s brother, Haroon.

Arnfield, (pic above) unbeaten in 16 fights, is angling for a British title shot and knows he can’t overlook Maxwell.  The Birmingham man, a former British light-middleweight title challenger, has been in with some of the UK’s best fighters and has on his ledger a spectacular KO victory over former domestic ruler Brian Rose.

“I’m taking him 100 per cent seriously,” said Arnfield, on his fight with Maxwell.  “When he knocked Brian out, it was a devastating knockout, so the punch power he’s got shows he’s very strong. He comes forward and doesn’t stop from start to finish so I’m not taking him lightly.

“As a pro he’s the best fighter I’ve been in with, experience-wise.  He’s boxed some good names like Liam Smith, who’s now the British champion, and he gave him a good fight.  He’s also been 12 rounds with Brian Rose too.

“From what I’ve seen of him as a spectator, I don’t think he’s got anything to trouble me.  I’ve got a tight guard, a good jab and I’m strong at the weight.  I’m looking forward to it.  I’ve had a bad few years, in and out of the ring, but I’m in a good place and ready to take on bigger and better opponents.”

After gradually working his way up the British light-middleweight rankings, Arnfield now feels he has outgrown the division.  Feeling more comfortable at 11st 6lbs, the Fylde Coast fighter has his sights on the country’s best middleweights and is urging them to tune in to VIPBOXING.TV on November 15th.

“I’m 6’3” and it’s been a big ask to get down to 11st. The likes of [British middleweight champ] Billy Joe Saunders, Matthew Macklin, and Martin Murray are all looking to move on, so it leaves the division wide open.  John Ryder is the next biggest opponent, and there are other good names out there, but I fancy my chances against any of them.

“The Winter Gardens is the best venue in Britain.  Haroon Khan is on the bill and I’m going to sell hundreds of tickets.  There are lots of other decent fighters on too and I can see this show being a massive success.  The last VIP show got over 15,000 people watching on the live stream, and hopefully we’ll pull in some big numbers for this one and show the other middleweights watching that they’ve got a threat coming.”

Promoter Steve Wood stated: “I’m really excited about this show.  Jack is getting himself into pole position for a British title shot but Max Maxwell can never be discounted.  He’s already derailed one of my Blackpool fighters in the past when he KO’d Brian Rose, so I’m hoping Jack will be fully focused on him.  We’ve got some other really exciting boxers on the show, and I’m delighted to have Haroon Khan on because he’s an exciting kid who could one day follow in the footsteps of his brother.  I’m currently also talking over promotional deals for undefeated British and Commonwealth champion Kevin Satchell and Prizefighter winner Terry Flannigan, and if nothing happens soon in the negotiations they may also be added to the show.”