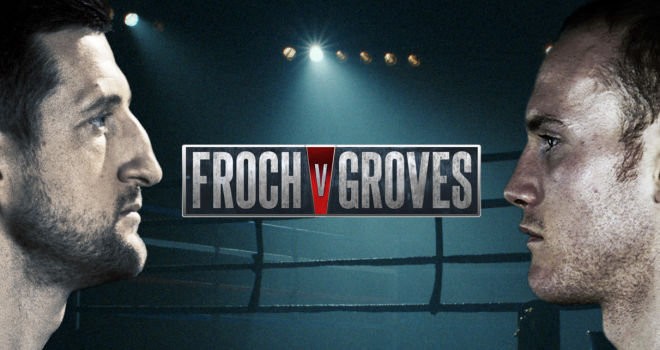 The Slickster Saint ready for the Venomous cobra

The closer the fight gets, the greater the hype. Fair enough Sky has invested a lot of screen time into this fight, but after all, with a pay per view (PPV) model, the fight deserves this sort of media attention.  After all this could be, potentially, a proper super middleweight domestic dust up of times gone by. For Froch, (won 31 [KO 22] lost 2 [KO 0] 0), the fight seems a little one sided in terms of the risk v reward equation. You see the media can be a cruel animal at times, at one stage crediting a boxer for his achievements, and then a fight later discrediting the same boxer if he suffers a loss. Froch, for all his fantastic achievements, is taking on a huge risk here in Groves, (won 19 [KO 15] lost 0 [KO 0] 0), make no doubt about it.

Groves has it all to gain, experience in a huge domestic fight on the world stage, taking on a seasoned and established name in the UK and in America with belts on the line, and if he does get defeated he has youth on his side to make a comeback. The absolute most that Froch can gain from this fight, is if he takes Groves out in style – and I think Froch knows this. Of course, on the flip side, this will be Groves’ biggest fight purse, and Froch will no doubt be making a lot of money from this fight, so they both stand to earn big money.

So let’s look at some of the factors in the build up to this intriguing fight so far.

Fight Breakdown: How I see the fight unfolding

As with my previous article, Spotlight: Froch v Groves, I still expect a late stoppage from Froch. The first round will enable us all to make a judgement call, whether they feel each other out or go full steam ahead. Of late, Froch has started faster in fights, instead of his trademark slow start, and I expect Groves to be using ring movement to frustrate Froch. If Groves elects to slip, slide and move, Froch will try and cut off the ring by backing Groves on the ropes. This way an elusive target becomes a more static target. Froch’s second strategy could be to goad Groves into a toe to toe exchange of punhces, however I doubt Groves would oblige, knowing full well that trading punches with Froch is far too risky. However, Froch knows too well that a young fighter’s ego can often be there undoing and if Froch managed to drag Groves into a battle, Groves will get knocked out.

Again how Groves starts will give us an indication of his fight strategy. If he meets Froch in the middle of the ring from the opening bell it would certainly surprise me. If Froch comes storming out, and Groves starts on the back foot, the question is can Groves sustain this over the distance? If he can, then this would be the ideal way to frustrate Froch, and if Groves is clever enough, setting traps for Froch would be the ideal way to catch him as he is coming in. As we all know catch a fighter as he is coming in and you are effectively doubling the weight of the jab. Groves has the ability to punch hard and displays a lovely downwards right punch, bringing the shoulder and body weight into the equation and delivering a concussive blow. Groves’ best assets are to counter work on the back foot, use footwork to turn away from the ropes and deploy lateral movement to avoid hard shots from Froch. It promises to be a fascinating clash of styles whatever the fight strategy of both fighters.

In the background of all this though, maybe the real winner is Eddie Hearn. As promoter, Hearn could see a new era in the super middleweight division if Groves wins with more longevity in his career earnings, that’s assuming he stays with Matchroom. If Froch wins Hearn will likely see some more PPV fights in the future if they can lure the likes of Andre Ward, or Gennady Golovkin over to our shores for a mega showdown. So for fight fans it really does – all hang in the balance.