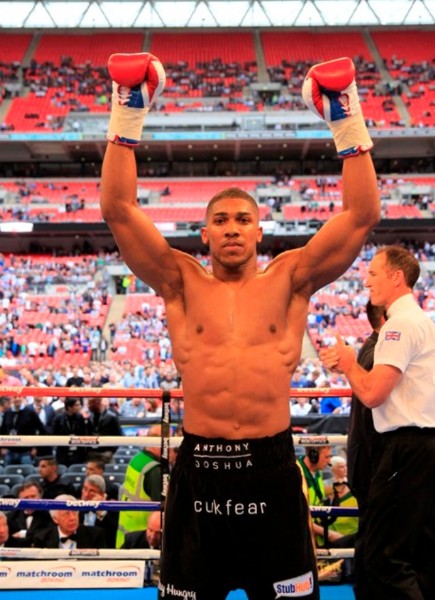 Without a doubt the biggest boxing crowd in the UK since the Second World War saw the main event, but what of the Hearn Undercard? Words like “Stacked” and “Mouth watering” were bandied about before fight night, but did they deliver? Here we go….

For the amount of interest in big Josh at the moment it is still strange to see him on the bottom of a card. And a far too many people witnessed another steamrollering by a young man who is most certainly going to be up at the top, or thereabouts, in 12 months time. He’s being groomed for one of the top slots and up to now Joshua has delivered each time he’s been asked. Pre-fight pundits had predicted Joshua would be more nervous for this fight than for his previous, they were wrong.

Legg is a banger and he took the only sensible course of action, sticking it to Joshua from almost the first second. When a left hook from Legg seemed to rock Joshua back for the first time since the Olympic final in 2012, he appeared to take a few seconds to regroup but it was just putting off the inevitable. It wasn’t really a wobble, but it was a first in his pro career. Joshua launched back with power and precision, taking Legg out before the end of round one with a fierce uppercut which split his guard and sent him rocking to the floor. Another quick victory for Big Josh and another stat in the bank. How much use this will be is anyone’s guess….

Jamie looked like nothing in the world would stop him reclaiming a world title since that day in the IBF boardroom stripped him of their version of the world crown. Tonight was no different. He face the widely titled “7th best Bantamweight in Thailand” for the vacant WBA Bantamweight title. Rachawat has been a bit of a minor celebrity since he arrived for the fight and certainly has some unorthodox preparation techniques. “We don’t really know what to expect from Thai fighters, especially when you see them having a full English breakfast in the hotel five days before the fight!” said Glenn McCrory.

What we all expected from Rachawat was boundless energy but it took until the second round for it to become apparent. Jim Watt used the word “buzzsaw” to describe Rachawat and it was about as apt a description as I can think of. He took the fight to McDonnell and Jamie responded by showing us why he’s now a World Champion with a classy and accomplished display of exactly how to box on the back foot. Rachawat surprised many in the crowd with his willingness to come forward and to engage with McDonnell.

Guest commentator Paulie Malignaggi had just started telling us about McDonnell’s lack of power in the tenth, when Jamie opened up a left hook on Rachawat which sent him straight to the floor and out of the fight. Truth be known, the judges had McDonnell way ahead by then. McDonnell looked elated as he received the world title for the second time and we all now know the name Tabtimdaeng Na Rachawat, don’t we… and if he was the 7th best Bantamweight in Thailand, what are the other six like?!

Kevin made a weight error before getting in the ring with Ghislain Maduma. Despite being under for the weigh-in, Mitchell gained 12lbs overnight -which is 2lbs more than allowed. People wondered if the wheels were coming off, and against the dangerous Canadian it was possibly going to be a rough night for Mitchell. Maduma was in top condition and carried an unbeaten record into this final eliminator.

Maduma started the fight on the front foot and was doing most of the work. He was quicker and more accurate than Mitchell and by the mid rounds he was clearly ahead. By the 8th it was obvious Maduma was starting to gas and Mitchell upped his work-rate in order to push pressure onto him. In the 11th Maduma was stumbling around and looked totally exhausted. Mitchell dropped him with a good left hook and Maduma managed to struggle to his feet but the ref wasn’t convinced and stopped the fight.

The result means Mitchell is still where he was prior to the fight; you don’t get to win title eliminators if you can’t make weight, which is a shame for Kevin.

This was DeGale’s chance to aim high and he took it against Brandon Gonzales. The winner had been promised a title fight vs the winner of Froch and Groves and if fighting for the opportunity in front of 80,000 couldn’t get you fired up, nothing ever will.

Gonzales started the fight well and seemed to be a heavy hitter – damaging DeGale’s nose and landing some terrific loaded shots. Unlike the old DeGale there was less preening and showing off and he dedicated himself to sticking to his jab and letting off focused and targeted combinations. Gonzales looked good value in the developing fight but DeGale unleashed a cracking combination in the 4th which dropped Gonzales. He recovered but not enough for the ref. Some people may argue that the stoppage was premature, but for DeGale it was job done.