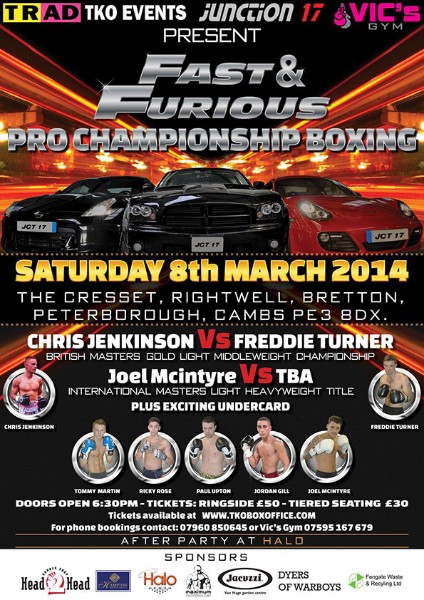 TRAD TKO head honcho Johnny Eames announces the latest offering from the TRAD TKO Events team, in association with Junction 17 Cars and Vic’s Gym – FAST & FURIOUS – a Night of Championship Boxing at the Cresset in Peterborough on Saturday 8th March 2014.

Turner, who is unbeaten in nine, goes straight back into Championship action, following his being crowned Southern Area Champion back in October, after a close victory over longtime champ Nathan Graham.

Jenkinson also comes into this fight a reigning Champ, having secured the International Masters Silver Light Middleweight title, by way of a sensational eighth round KO of Lyndon Newman back in July last year.

On March 8th McIntyre faces a yet to be named opponent for the International Masters Light Heavyweight crown.

Unbeaten local teen star Tommy ‘Da Gun’ Martin finally gets his wish and steps up to a six rounder, against a yet to be named opponent.

Tommy’s record stands at six fights, six wins, two by stoppage, including a sensational first round stoppage of Waqas Ahmed on his last outing in November last year.

Former amateur star Paul Upton get’s the third pro outing of his fledgling career, against a yet to be named opponent.

Upton wowed the York Hall crowd on both his outings to date, on way to securing shutout points victories over Dee Mitchell in July and Duane Green in October.

Chatteris, Cambs’ unbeaten Featherweight, Jordan Gill, makes his first outing on a TRAD TKO show, against a yet to be named opponent.

Gill comes into the fight on the back of a sensational thirty six second first round knockout of Aaron Flinn back in October.

Alternatively tickets can be purchased in person at the TRAD TKO Boxing Gym in Canning Town, Junction 17 Cars in Peterborough or from any of the boxers taking part.